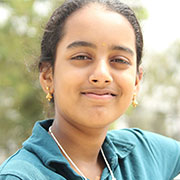 “A Small Decision for Humanity” by Jayashabari Shankar, is the Third Prize winning story in the junior category of the second biannual Short Story Contest 2017.

A Small Decision for Humanity

I stared at the misty darkness of the night. The moon glimmered and shone brightly as if it knew a secret no one else knew. “Stop looking,” I thought. “Concentrate on your run-away plan.” It was midnight and I was going to run away from home. Any place is better than my terrible home. My father is such a rich man, but he won’t even give me a bit of money. I am overburdened with homework and my teachers always scold me. My father hits me for such silly reasons. Life has been terrifying all because my mother left home two years ago. She is a hiker and aspires to climb Mt.Everest. She left all those years ago to settle in Nepal and to climb the mountains.

I have always wanted siblings, but have not even got one. Oh! Such a miserable life I lead. I tightened my backpack and steadily held my lunch bag. It was right; I was going away from home. I slowly took two steps and turned around to get the last glimpse of my home. The window of my bedroom was open, with a rope hanging from it. “Good evidence for a policeman,” I thought, smiling. But really would my father call a policeman? He sure hates me, for I know. He wouldn’t even spend a bit of money for me.” I tried to stop thinking of those things and tried to think about my future.

Where would I stay, what would I eat, and where would I get clothes to wear? I brought only a few clothes in my string bag, but those would only last a few days, and what was the use of clothes if I had no place to change into them? Most importantly, where would I stay? Yes, I could stay in the abandoned mansion off in the corner, but many people told me that the house was haunted by a ghost girl. I didn’t believe in ghosts, but why should I take the risk? Being tormented by a ghost and dying is the worst fate.

I would rather stay back. I was lost in these thoughts as I stuttered down the dark streets. I shivered, it was so cold. I should have brought my jacket along. The wind blew and the trees shook, giving ghostly shadows. Large houses and mansions looked ghostly in the darkness. I stared in front of me, but someone seemed to be following me. I quickly turned around, but no one was there. A chill rose up my spine. “Who are you?” I shouted. “Come out, whoever you are. Come if you have courage!” A soft hand touched me on the back. I swiftly turned around. A young boy of my age stood there. “Who are you?” I said with big eyes. “You freaked me out.”

The boy looked poor. He had no shoes and was unnaturally thin. “I am Bindra,” the boy said smiling. “What are you doing so late into the night?” he asked with precise English. I was so astonished that a boy who looked so uncivilised could speak English better than me, an English Olympiad winner. I was suspicious of the boy, but he looked like a perfectly good boy, so I told him about my story.

I started from the part of my father, and how mom moved away, teachers scolding me, and all bundled up with no sibling. As I explained the story, the boy seemed to understand. After an utter period of silence, he asked, “What’s your name?” “I’m Akshay,” I said. Then a thought struck me, “Why are you out so late in the night? Was your incident too like mine?” The boy solemnly nodded and told his story. “I was left as an orphan at the age of 6. I have a brother and sister to take care of, so I sell ice creams for money. I live in the orphanage, but they do not give anything, just shelter. I learnt English by peeking into schools. I have always wanted to dress up in such a uniform.” Bindra had a dreamy look. “All the boys and girls, going to school, carrying a bag, well, that’s just my dream. It is my fate like this.” “Forget it,” Bindra said, staring at the ground. As I looked at Bindra, my sympathy and sadness blended together to make a change in me.

I was going home, not only that, I was going to take Bindra home. “I’m going,” I said. “Where?” Bindra asked. “Home,” I said. “And not only me. You too.” I put a hand on Bindra’s shoulder. “Come home with me. You can be my sibling I have always wanted. You can wear a uniform like all those boys and girls you see.” “No,” Bindra said. “I won’t leave my brother and sister.” “My father will donate money,” I said. “Don’t worry. Bring your siblings along tomorrow. Another brother and a sister won’t bother me. Get them tomorrow.” A huge smile appeared on Bindra. “Thanks,” he said. “Thanks, brother.” “Yeah," I thought a new brother. As I walked back home my anger, sorrow, and sadness all melted away to form a true pot of happiness. I had taken a good decision for humanity. A small one, but a great one.