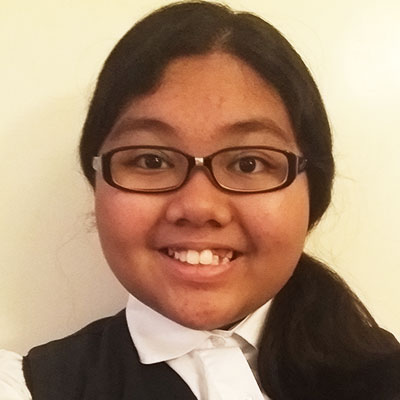 “Them Pebbles” by Cindale Diaz Ceñidoza, is the Highly Commended story in the junior category of the first biannual International Short Story Contest 2017 which was organized by Kids World Fun.

Mornings at Camson International School were usually greeted by a girl with black shoulder-length hair, and dark brown eyes in desperate need of something. Nonetheless, she walked to the back of her beloved fifth grade classroom, the bench waiting for her bag, and the pebbles pleading to be stepped on. As Madeleine walked towards the back of her classroom, a soft crunch sound was coming from all the pebbles she stepped on.

Thump, went her bag. Maddie sat on the pebbles and became bored. Debbie’s taking longer than usual, thought Maddie. She looked down at the pebbles and saw a tiny carrot-shaped pebble, smooth on every single side. Just as she was about to pick it up, Debbie, eyes brown with long, brown hair tied in a ponytail finally arrived, Ophelia and Caroline in the back. “What took you so long?” Maddie said to Debbie.

“Sorry Maddie I overslept a bit and woke up with ten minutes to prepare!” said Debbie, rushing what she said, but looking really sorry. She froze all of a sudden and started rummaging in her backpack. She sighed deeply and dropped her backpack. “Forgetting my food at home is proof, so I’m calling my parents. See ya!” said Debbie as she ran to the front desk.

“I hope you get your food!” Maddie shouted. After an eternity, she saw Evangeline, long, dark brown hair with dark brown eyes, approaching from the left, and Debbie from the right. “Hey guys!” Eva said cheerfully. “Let’s talk.” she said as Debbie came. That was how the five fifth graders started their group conversation. They talked about many things, and Ophelia convinced them to play Kings before the bell rang

“Just for Ophee.” replied Carol with a sing-song voice, smirking as her brown braids swayed.

“Okay, I was just kidding!” said Carol, wiping her happy tears away as they walked to the hard court. Once they started playing, Phoebe and Heather joined them. When the bell rang, the two aces, Heather and Phoebe, were still battling to step on each other’s foot. Everyone lined up and got their bags anyway to start their day. The day usually ends with no worries. Until April arrived.

April Fool’s Day was the worst day for Maddie, Ophelia, Phoebe, and some other people, yet the cause wasn’t the day itself. Their dads work for the biggest company in California, Jensal Co. They did great things to California, like building great theme parks and malls (which everyone loved!). Admission for Camson was always high, and paying the admission for 100+ students was very, very expensive for them. So, they decided not to pay the admission for Grades 1, 6, and 9. The ten people who were in fifth grade were in disbelief, since they were starting sixth grade next school year.

“I don’t get it, they pay LOADS to build these theme parks and malls and stuff, but not for admission? I’ve been in this school for five years!” said Ophelia angrily. Everyone agreed except for Harold, with shaggy black hair and thick glasses.

“Dad works for Jensal Co., but I’m going to sixth grade!” gloated Harold happily. Everyone stared at him. Harold felt pressured, backed away from them and ran to his friends.

Everyone in the fifth grade who was leaving Camson gathered around a table in an empty classroom to discuss what to do so nobody forgets them the next day. The boys didn’t have much stuff to say, but they were eager for an answer. “Umm, we could maybe make memorable memories now, umm, right?” asked Grace shyly.

“We have IVSF5th and Breakout EDU coming up.” added Ophelia.

“And we’re in groups for all of them!” said Phoebe happily. Bernie knew what Phoebe was thinking about, so he said, “Let’s make memories with our groups! It doesn’t have to be everyone, but at least your group mates would remember you!”

“Discussion finished!” said Maddie as she banged the table with a pretend-gavel. Everyone left the table and went back to their classrooms happily. For IVSF5th, they made their teams, thought of a science fair project, did their experiments, calculated their results, and designed their tri-fold cardboard poster to show to the judges. They finished their science fairs at the end of May, and made new groups for designing their Breakout EDU’s. They were the highlight of fifth grade, including group juggling.

As June arrived, Maddie and Eva walked to their classroom and put their bags down on the bench. When they sat on the pebbles, they suddenly heard shouting. “HEY! FRANK’S HEARD THAT JENSAL CO. WILL BE PAYING FOR ADMISSION!” shouted Carol, Ophelia, and Debbie while running. The two stared at each other, while the girls threw their bags to the pebbles and sat down right away.

“I think he’s wrong,” said Maddie, standing up. “Didn’t you ever hear about Frank getting confused all the time since the dare to hit his head on that huge gong?”

“But this is for sure true! He’ll never think of something that serious.” said Carol. They nodded, except Maddie; she wasn’t convinced.

“I’ll ask Mom and Dad if it’s true.” said Maddie. Everyone agreed and started their usual morning conversation. Maddie joined in the conversation and sat down again.

Eight hours later, Maddie entered the car. As she lied down, she asked, “Mom? Dad? Did Jensal Co. change their minds to pay for admission?”

“Madeleine, do you think they would change their mind just after two months?” said Dad. Maddie smiled sadly and thought, no. In no time, they reached home. Maddie slammed her bedroom door shut for alone time. She took a nap and woke up at 7 PM, ate dinner, played with Mik-Mik the hamster, and got ready for bed. She cried herself to sleep, thinking about everyone’s reactions tomorrow.

Maddie went to the back of her classroom and sat down on the pebbles to wait for everyone. She looked down at the pebbles and saw the pebble she saw months ago. She picked it up and started a beat with the pebble, humming along as her friends and Phoebe came and sat down. They started their usual morning conversation, Maddie only half listening. Eva seemed to notice.

“Maddie, spit it out.” Eva said. All eyes turned to Maddie. She took a deep breath and said,

“Okay. Frank was wrong; his rumor was false. Jensal isn’t paying for admission.” said Maddie as she dropped the pebble. Phoebe and Ophelia’s smiles turned into a frown. Now, they sat in silence. Fortunately, the bell rang for class a minute later. They got up, grabbed their bags and headed to class.

The last day of school lasted three hours filled with compliments and pictures. When the bell rang to go home, Maddie, Ophelia, Debbie, and Eva walked to the bus area and took a last picture. They stayed together until the very end; it was a very sad moment for the four. “We’ll see each other soon!” shouted Eva to them.

“I’ll miss you two!” shouted Debbie before she disappeared into her bus. They all rode in their buses, went home, and tried to enjoy their summer vacations.

3 months later found everyone who left Camson taking their entrance exams to their schools. Once they passed their exams, their families started buying the uniforms and supplies a week later. Maddie, Phoebe and Ophelia tried making friends with the others at Forno Middle School. “I miss Camson already.” muttered Phoebe as they sat down on their desks. Making new friends at Forno was easier than they expected; they were nice. They started classes on the next day and learned things they never learned; it was a bit hard to adjust to the learning system.

Beep, beep, beep, goes the alarm clock. Maddie wakes up, washes, and puts on her uniform, feeling half-awake. She entered the kitchen to eat breakfast to go to school. As she sat down, she heard on the radio, “Students turning into 1st graders, 6th graders, and 9th graders from Camson International School need not to worry to go to a different school! One of Jensal Co.’s workers convinced the head of Jensal Co. to let everyone go back to Camson International School! They will accept students to go to Camson after 2017. Any bad weather?” Maddie turned off the radio. I’m not imagining it, thought Maddie. I want to go back to Camson, right now. She finished eating breakfast and went upstairs to brush her teeth. She went back downstairs to wait for the bus outside. She smiled as she sat down in the bus.

When the bus arrived at school, she walked to the school grounds and waited for Ophelia and Phoebe. Once they arrived, she told them everything from the radio. They were thrilled! Camson International School - what Maddie missed most about the school was the sound and feel of stepping on the pebbles, the bench, her other friends and that carrot-shaped pebble she left there; she wondered if it would still be there.

November 22, 2016; Maddie and her little sister, Jamie, were going to get vaccines. “I don’t wanna get a pokey-pokes!” wailed Jamie as they were walking to the hospital with their dad. He asked the nurses in the hospital where the vaccination area was. One nurse told them to go around the hospital from the outside, and enter from the left-most door. They did as they were told. Unfortunately, the nurse was wrong, but they crossed something Maddie was wishing to see ever since she started school at Forno; pebbles. The exact same pebbles she saw in the back of her beloved fifth grade classroom. Maddie started getting teary as she walked across the pebbles. Crunch, crunch, crunch, goes the pebbles. She picks up a random pebble, thinking it would be that carrot-shaped pebble. It wasn’t. She wished she brought it home. Jamie and her dad had no idea how important this place was to her; in fact, they seem a bit annoyed that they crossed the wrong way. Crossing this way ensured her that she was going to be comfortable forever, and she knew that she didn’t have to go back to Camson International School. I’ll stay in Forno Middle School, she thought. All because of seeing them pebbles.