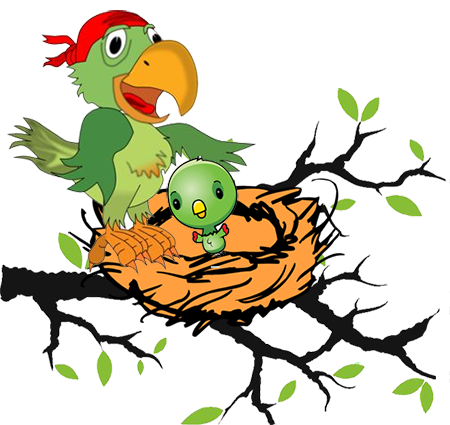 “When Will Humans Stop Killing Animals And Birds?” is one of the outstanding stories of the second biannual Short Story Contest 2016 written by Krishna Dinesh Choumal, India.

When Will Humans Stop Killing Animals And Birds?

In the deep green forest of Gir, Gujarat, India, where great lions roamed, there was a mango tree on which lived a beautiful parrot called Rinky, in a nest.

One day, when Rinky was in her nest, she stood upon one leg, and then before she realized it, she laid a little egg. Days passed. One fine and wonderful day, to Rinky’s great surprise, the egg batched. Pinky, who was Rinky’s friend, named the baby bird Dodo.

However, Rinky could not feed her son, cute Dodo. She lay ill in her nest.

Pinky loved to have Dodo with her.

In a very little time, Dodo had a sound body, and impressive voice of Twe…Twwe.. Mitoo…Mitoo. Dodo flew high in the blue sky.

Pinky told him, “Be especially aware of human visitors to the forest. All animals and birds follow the rules of nature and forest; only humans are very careless! They just cut trees; destroy forests, and kill and animals and birds just for their entertainment or so-called needs. They are very selfish.”

Dodo believed that he was a caretaker and guard of the forest.

One afternoon Dodo was resting in his nest. Suddenly he heard a sound like fire from a gun! The entire Gir forest was now full of different kinds of scared sounds of birds and animals.

Dodo knew that he had to spread the news that this deadly hunter was in the forest. Just then, he saw that the hunter was aiming at his mother Pinky. Without wasting a second, he flew towards his mother. As the bullet began to fly to his mother, he came in between. The bullet hit Dodo, and Pinky was saved. Dodo sacrificed his life for his mother.

By seeing how a bird saved another bird by sacrificing his life, the hunter was ashamed of his cruel deed. He threw away his gun forever, and decided not to hunt birds again.

Pinky flew around Dodo’s dead body. She could not stop crying. The entire Gir forest trembled with her cries. Every animal and bird in the forest stopped silently for some time to pay their last regards to the brave parrot Dodo, who had a heart like a brave lion.