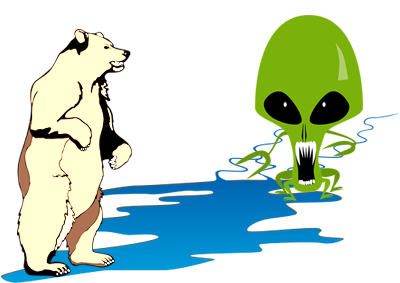 “The Preposterous Polar Bear” is one of the outstanding stories of the second biannual Short Story Contest 2016 written by Yadav Dayaram, South Africa.

Mack was a polar bear that lived in the Arctic. He had many friends. They were Henry the seal, Mike the penguin, and Max and Nicky, his polar bear friends from school.

Mack’s nickname was “Preposterous Mack” because he loved to dance like Michael Jackson. He looked preposterous when he danced. Mack was also a very good fighter. Mack and his friends had lots of fun and played lots of games all day.

However, there was one big problem! Every night a bunch of aliens attacked the animals. The aliens were trying to melt all the ice. This would destroy their home!

Trying to protect themselves, Mack and his friends came up with a plan. They built an electric fence, and put cameras and laser beams everywhere. They sat up at night and waited for the aliens.

Suddenly, there was a loud noise and bright lights in the sky. The aliens had arrived! The alien ship had huge weapons.

Mack and his friends were not worried, as they had huge blaster guns. They fired repeatedly at the aliens. The electric fence and the lasers, along with the blaster guns spitting fire, killed all the aliens. Mack, Nicky, Henry, Mike and Max won! They celebrated with everybody!

The polar bears were now safe.

Two months later, it was Preposterous Mack’s birthday. Mack had a big dance party. His friends gave him many presents. Mack dressed up like Michael Jackson. There was a dancing competition. Mack did the moonwalk and he won! It was the best birthday ever!

Then the worst thing happened! The next day after the party, Mack and his friends were lazing on the ice. Suddenly, there was a screeching sound, and there were bright lights in the sky. But it was not the Northern Lights.

It was a humungous space ship. Inside was the biggest, ugliest alien they had ever seen. It was the mother alien! The mother alien landed her space ship on the ice. She fired her weapons at the surprised animals.

Mack and his friends ran as fast as they could to their igloos to get their blaster guns. They fought as hard as they could. It was a fierce battle. There were laser beams everywhere.

Eventually, Mack and his friends killed the mother alien and all her soldiers.

The friends celebrated again. They had saved their home once again!

The mayor of the polar bears was very happy.

Mack had designed the blaster guns, and he had showed his friends how to use them. Therefore, the mayor gave Mack and his friends gold medals for their bravery.

Preposterous Mack was a hero!