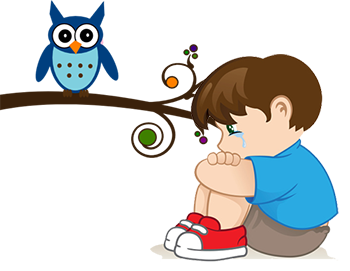 “The Owl’s Tale” is one of the outstanding stories of the second biannual Short Story Contest 2016 written by Aashi R Chaudhari, India.

One day, Olie the owl was sitting on a tree branch near a park. A group of kids came there and started playing. After some time, one of them made a silly mistake and all other children made fun of him by calling him."OWL, OWL".

When all other kids went off, the poor child sat under that tree and cried for a long time. Olie went to him and asked him the reason for his crying. The boy told him that he was insulted when his friend compared him with an owl. Both the kid and Olie were now upset.

Olie could not bear it anymore and flew back to his grandfather to ask the reason for the same. His grandfather, a very old one, listened to him silently and asked him to hear an age-old story. Thus, he started his story:

"Many many years back, all the birds were very silly. Human beings made fun of them. One day, they gathered to find out a solution for their problem. Different birds had different ideas. Then a very old owl said, "Can we go to the schools, sit in the windows of the classrooms and listen to the teachers and learn, just as kids do?" The idea of going to schools was very nice. So, from the next morning, all the birds started attending their WINDOW CLASSROOMS and that is how they became wiser and wiser.”

He added, "But dear Olie, as you know, we owls are nocturnal and no schools in the world are open in night time." “But why only us, grandpa?" asked Olie.

Grandpa explained, "No, my child. It's not only us. Even the kids who are not attentive and sleep in the day time, remain like us."

Poor Olie understood everything and thanked his grandfather for sharing this story with him. From that day onwards, Olie was never upset whenever he was compared with stupid fellows, as he had accepted the fact as God's wish.

Moral: Study in day time and Sleep tight only at night. Don't follow the owl and you will be alright.