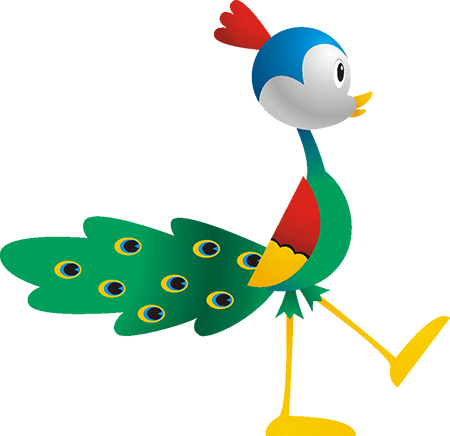 “The Lost Peacock” is one of the outstanding stories of the second biannual Short Story Contest 2016 written by Nanki J Singh, India.

“Where is Popo?” asked father peacock worriedly. “I’ve sent him to the market to get some things,” answered mother peacock.

“I’ve told you a hundred times, he’s too small to wander about alone. Perhaps, the only reason I hesitate to let him out alone is the threat of those humans…”

“Oh dear, it’s his fifth birthday tomorrow. If he does not learn to become independent today, he will suffer tomorrow. “ “I understand that completely, but I’m afraid the humans would do the same to my Popo which they did to me when I was young.” “Times have changed, dear.”


“What a beautiful day it is! I feel so happy with such a huge responsibility on my shoulders. After all, I will finally be five years old tomorrow! Yippee!” Popo was never so happy before. Just a day before his birthday, his mother had given him the best gift he could ever have - his very first trip to the peacock mart, alone.

Hopping from one roof to the other, Popo followed the exact route which mother had told him, but on his way to the mart, he reached a wide gap. To his disappointment, two consecutive houses had been dismantled for construction.

“Oh no! How can I manage to perform such a long jump? Two consecutive houses dismantled? I’m such an unlucky peacock…” because of his young age Popo could not jump or fly such a long distance. He decided to take the longer route by taking a turn from the house he was on.

“Twenty, twenty one, twenty two! And here is the peacock mart on my right? Goodness gracious where’s the mart?” Popo went numb, his body felt hotter than usual and everything around him disappeared.

“How can I come all this way that too following the wrong route? This just cannot be. I have to do something,” said Popo knowing he was helpless and lost. “I will go back counting the exact number of houses that I crossed. Twenty… or twenty five…?” he had forgotten the number of houses too. The only path that he could follow was - the path of hope.

Popo decided to continue his journey back home. But alas! Forgetful Popo forgot his count! Was he supposed to go left or right? Popo’s hope drowned into a well full of helplessness just the way the sun drowned into the horizon.

“Peehoo! Meehoo! Mom, dad!” Popo screamed as loud as he could.


“Mom did you hear that? I think there’s a peacock on our terrace.”

“Yes, even I heard a peacock scream. Peacocks find it difficult to see in the dark and that might be the reason for the poor peacock to be crying.”

“Mom I want to see the peacock! Please mom …”

“Okay, okay sweetheart. But do not make noise, or else the peacock will get scared and will run away”


The peacock was lost in thought, thinking hard to find his way back home. Suddenly he sensed the presence of somebody near him …

“Mom! It’s a baby peacock!” the young boy told his mom; perhaps he was too loud.

“HUMANS!” the peacock exclaimed and ran as fast as he could, but he didn’t keep track of the number of houses and took turns without any calculation. He simply ran, to save his life from humans.

Popo was drenched in sweat. He struggled to catch his breath. He also had lost whichever few feathers he had grown on his body. Poor Popo felt helpless and angry.

“What should I do? Where should I go? I have to find my way back home, or else these humans will kill me …”

Wandering from roof to roof, tree to tower, unknowingly but luckily Popo had reached a human settlement, which was not far away from Popo and his fellow peacocks’ trees. Fortunately, Popo’s parents heard his screams.

Meanwhile, Popo decided to silently wait where he was until sunrise. After sometime, he heard the call of some peacocks. He replied, and finally his parents were able to find him.

Mother Peacock hugged Popo and cried, “Popo are you okay?”

“Please don’t cry mom, I’m okay now…I’m lucky to have parents like you… I will never leave the house without you… I will always listen to you…sorry mom, sorry dad.”

“We have a surprise waiting for you, dear,” said Popo’s mother, with a smiling face.