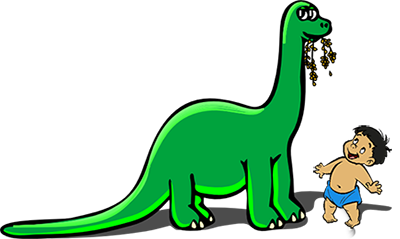 “The Gigantic Friends” is one of the outstanding stories of the second biannual Short Story Contest 2016 written by Abdullah Khan Qureshi, Pakistan.

Some nine million years ago, there lived a boy who did not have any name because during those times, there hardly were any humans on the face of this earth and if there were any, they lived in jungles just like wild animals. This was actually the time when dinosaurs existed in large numbers. There were diplodocuses, T-rexes, Triceratops and many other forms of dinosaurs including carnivores, herbivores and omnivores.

The boy loved the dinosaurs. They somehow excited him very much. He was impressed by their mammoth size and the vigorous way they moved on land. He was very eager to befriend them but didn’t really know how to lend a hand forward because after all those were gigantically dangerous.

Another problem that the boy had was that he lived right in the middle of a thick jungle while the dinosaurs inhabited the outskirts of the jungle and mountains around it. It was only once in a while that the boy got a chance to catch sight of those colossal animals; that too from a safe distance only when the dinosaurs came inside the jungle by mistake. The jungle was so dark that it was almost impossible for those giants to move among bulky trees or when the boy went out for a change.

One fine morning when the sun was bright, the boy decided to go around looking for dinosaurs. He started towards the east of the jungle and after walking for a couple of miles, was amazed to see a diplodocus grazing upon tall trees. It was a herbivore. The boy decided at once to go closer to see its reaction, as he knew that diplodocuses were not harmful. As he was about to approach his new friend to be, suddenly, three T-rexes, who were carnivores, appeared from nowhere to tear apart that poor diplodocus in order to eat it. As the boy was still under the cover of dense trees, they couldn’t see him. The boy got very scared but didn’t lose his control and immediately started to look around for something. He was lucky enough to have found a dead triceratops lying nearby. The boy quickly reached up to the dead body for a large piece of broken leg and threw it in front of the T-rexes. When they saw the ready-to-eat meat, they forgot about the diplodocus and went to nibble upon the dead triceratops.

In the meanwhile, the boy ran toward the diplodocus that was already looking at him with grateful eyes. It made him sit on its back and ran away towards its habitat. From that day on, they became fast friends. The diplodocus rode him everywhere and the boy brought him delicious fruit and herbs from inside the jungle. They were living a happy life when an enormous earthquake jolted every inch of that piece of land. Shooting stars fell and volcanoes begun to erupt. Every animal and dinosaur in the surroundings of the jungle was in trouble. The boy was safe due to the solidity and compactness of the jungle he lived in. He was very worried for his friend and headed toward its habitat to check upon his well being. The land was trembling with shocks but he didn’t give up and somehow finally succeeded to reach the diplodocus that was scared to bits because almost every animal had died and those who were left were about to die. The boy also got very upset at glimpsing such a horrific scene. As he knew the language of dinosaurs which he learned from his friend, he offered refuge to all the dinosaurs irrespective of their kind and nature. They all tried hard and somehow managed to go with him inside the jungle where they all breathed a sigh of relief because huge trees protected it, and the distance from the volcano made it a safer place.

The aftershocks remained for a few days. That gave an opportunity to the boy to serve his guests well and to the dinosaurs including T-rexes to know and respect the boy more. When things returned to normal the dinosaurs went back to their habitats, but now they were all good friends and the boy no longer had to fear the gigantic creatures.