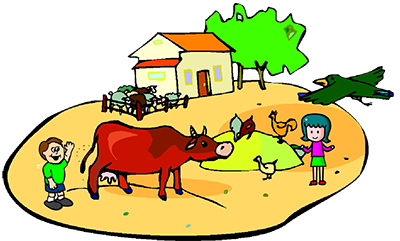 “The Amazing Children” is one of the outstanding stories of the second biannual Short Story Contest 2016 written by Yuvan S. Nanjan, India.

Once upon a time, in a small village, there lived two children named Edward and Emmie. They were living with their mother as their father had died, and they were poor. Edward and Emmie were kind children. Both used to spend time with the animals in the farm they had. Their farm was their only hope of money.

One day, they were happy to see that their two cows had given birth to one calf each. After a month, their hen laid eggs, which eventually hatched into, to 8 chicks. It was fun playing with the chicks and the calves.

One day, danger arose. There was a drought and the citizens and the animals of the village had a tough time. The headman decided that they move from that place because all the wells were empty.

“But mummy...,”said Emmie, and her mother interrupted her by saying, “No buts! We are shifting tomorrow itself.”

The next day, a man went to the town square and said to the headman, “Sir, don’t worry if there is a drought. I have enough water with me. I can provide you with water – ten pieces of bronze for a litre,” said the stranger.

“Ok, but what is your name?” asked the headman.

The man replied, “My name is Daniel.”

Therefore, Daniel started selling water. Edward, Emmie, Karl and Susie didn’t know this. They noticed that all the people were managing to get water and Edward asked a man from the village, “Uncle, how come all are having water when there is a drought?”

The man replied, “Children, a man is selling water in the market. It costs ten pieces of bronze for a liter.”

“That’s the reason behind all this,” said Karl.

They went to their homes and told everything to their parents. They took the money, went to Daniel’s shop, and bought water. They soon became friends. After a few days, there was storm and rain and the drought got over. People were happy that they would have lots of water in the wells. Unfortunately, for the excited people, there was no water in the wells.

Again, Daniel sold a litre of water for 2 pieces of silver. People had no other choice but to buy water from him.

The next day, the children went to play. Edward threw the ball high and the others thought that it would fall into the nearby well. Therefore, they tried to catch it but it was too late. The ball had gone into the well. They peeped into the well and saw the ball bouncing on something weird. They saw a hole in a corner and some water next to it. Could the water of the well be under the strange thing? The children thought that something was wrong. Could Daniel be the one who put the thing in the well?

That evening, they thought of following Daniel after he closed his shop. The next day, they followed him after he finished selling water. He went through the forest for a long time and always turned around to see if anyone was following him. At last, he went through some ferns. The children followed him through the ferns and got surprised at what they saw. There was a huge tank and under it, water was dripping. The children understood that Daniel had made some connection between the wells and his tank. They also saw a house next to it and Daniel went inside. The children saw pipes leading everywhere – into the house, into the tank and a pipe was filling water into a pit. The children damaged some pipes and water started flowing out.

Edward then rushed to the town square to inform the headman about this. The headman sent some of his guards with Edward and arrested Daniel.

They rushed home and gave their mother the gold coins. The four children became rich and they lived happily ever after.