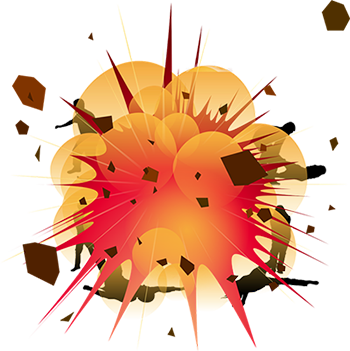 “Shadows - The Chaos” is one of the outstanding stories of the second biannual Short Story Contest 2016 written by Vrishaank Sharma, India.

Once there was a lonely village outside the city that nobody cared about. The villagers hated that and wanted to be recognized, so they formed a group called the Shadows. It was a terrorist group for bombs, arms, knives etc.

One festival day, the Shadows put a bomb in the mall. A few hours later the bomb exploded, and everywhere there was chaos. When the CBI and the police came for investigation, they found traces of Ammonium nitrate.

One particular agent called Rajesh was interested in this matter and was sure that this was not any normal terrorist group. Therefore, he dispersed some micro-bugs around the city to hear any terrorist group speaking. He came to know that the group was in that village, but Shadows knew they had been overheard so they shifted base. They packed their bags, put enough clothes and foods, stole an aeroplane and went to the Himalayas.

Then Rajesh commanded four agents to track them. Their names were Harsh, Vrish, Soami and Aadi. These four agents did not have a clue as to what was going on, as they were rookies. When Rajesh told them about this, they knew they were going to fail. They were only 21 years old. Rajesh did not have time to train them so they went unprepared.

First, they did not have a clue where the crooks had gone. They could not steal a plane or else they would be kicked out of CBI and be sent to jail. So they asked an agent who was involved in tracking down thieves and asked him if they could do his job and give them his plane. He readily agreed as he had more pressing matters to attend to. They took the plane and started looking for the thieves.

Meanwhile, while they were searching for the terrorist group, Shadows put another bomb in Kolkota and the bomb exploded causing more chaos. It was displayed across every news channel. It was said that if even one person of the gang was caught dead or alive, there would be a 100 crores INR prize.

Then there was a person in India, who was a special cop, named Vrishaank. Now this Vrishaank a.k.a The Rhino was already looking for the Shadows. He knew that there was no member of the gang in South India, so he started looking north for the ‘Shadows’ as he was in desperate need of money and 100 crores INR was a huge amount.

Now Rajesh and the four agents heard the news so they knew that they had to catch the ‘Shadows’. They also knew that it was displayed in the news so many people will try to catch the gang, as it was a large sum of money. They knew they had less time but they had not found any clues or traces of the group. Meanwhile, Vrishaank had started searching the Himalayas.

He had almost lost all hope when he saw some ashes of firewood leading up to Mount Everest. He was excited as he was going to catch the gang. Meanwhile Rajesh was heading towards Mount Everest as the mountains outside the cities were the only place left and he knew this would be a good place to hide.

Suddenly their plane’s wings frosted and they were going down! They didn’t know what to do. Rajesh tried to keep everybody calm, but everywhere the rookies were panicking trying to collect their winter gear to survive. Rajesh could not do anything; the controls were stiff.

“Hello? We’re about to die here and you say keep calm!” said Vrish.

“Yeah he thinks we’re having a jolly time banging into the sides of the plane,” said Harsh.

“That’s not what I meant,” said Rajesh.

While they were having this nice little chat the plane crashed, and frost spread rapidly across the plane.

Meanwhile, Vrishaank had stopped his plane and had started following the clues, which led to a big cave. He thought to himself, “I can’t catch all the gang by myself, I need help...”

Meanwhile after Rajesh calmed everybody down they went towards Mount Everest. Finally, after many groans, they finally reached a cave. They first saw a person standing outside the cave so they thought he was part of the gang and started attacking him, but when he told he was searching for the gang they stopped attacking him. “I need your help. I have found the Shadows’s hiding place, but I need a few people to take them down. Could you guys help me?” said Vrishaank.

“Yeah,” they all chorused.

So, silently, they went inside the cavern. First, the light was blinding, but when it cleared for all of them, the place they were in was AWESOME. Few Xbox one controllers were put carelessly on the ground; there was a chessboard, a disco ball, a heater, a generator, any gun you can imagine and a full bag of grenades. Vrishaank signalled to them to take a few grenades and guns before anybody came. They went and each took an AK-47 and a modified pistol, some cache of ammo and few grenades each.

Now as they were armed, they were ready to take on the gang. They moved sneakily to the main room. It was full of junk. The gang was sitting there watching an action movie; coke and chips packets littered the floor.

“Now’s the perfect chance,” whispered Vrishaank. They all went into the room and started firing randomly. The Shadows were actually not there; it was just dummies. Suddenly, from the side, the Shadows attacked. A fierce fight occurred. The team was outnumbered, but they fought bravely and the Shadows surrendered. Quickly they stripped them of their weapons, hauled everybody onto Vrishaank’s plane, and took off. When the government saw this, they were pleased and gave them the bounty.

Vrishaank was in the top-most ranking CBI investigators and Rajesh and the rookies were promoted. In addition, they solved many more adventures to come.