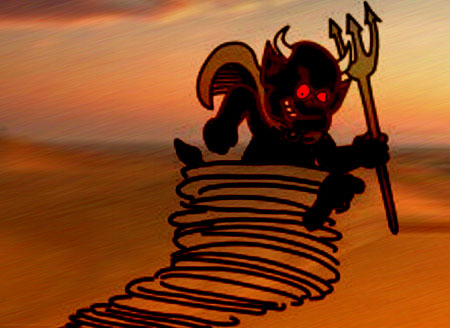 “Marco Polo Diaries: The Sand Devils” is one of the outstanding stories of the second biannual Short Story Contest 2016 written by Luca Lubbe, South Africa.

We had traveled through the dark of night. Yesterday our company had met another merchant caravan along the desert road. Father and Maffeo had decided that we should travel with the caravan as long as we could. In combined numbers we would have strength to fend off bandits, should they come our way. He was wrong.

We had traveled for almost two days with only short stops for respite. If not for my donkey, I would surely have died from exhaustion in that God-forsaken desert. Many must have suffered that unfortunate fate: I had spotted three skeletons on the road as we passed. Well, I call it a road; it was more of a bank of sandstone that stretched on for miles. There was nothing living along this road; the few bushes that I'd see every few hours or so looked like they hadn't seen a drop of water in centuries.

It was mid-afternoon when we spotted it. A vast brown cloud stretching right across the reaches of the horizon. I looked to Maffeo who was riding next to me at the time.

“Sandstorm.” he muttered. The word did not make sense to me at first, since I had grown up in Venice most of my life, where there was no such thing as a “sandstorm,” but I did not have to understand it to sense the dread in his voice.

“Marco, wrap this around your head and mouth.” said my father, as he handed me a cotton blanket. “We will have to wait out the storm.”

I watched as the storm drew closer. One could hear it from over ten kilometers away. The entire caravan had stopped and pitched up their tents. I wondered if they could withstand the fury of the fast approaching winds. My father explained to me that the road was a natural ditch, so the full fury of the storm would mostly pass over us. I still had my doubts.

My thoughts drifted towards my father; he seemed distant of late, as if his mind was elsewhere. I couldn't shake off the feeling that he was keeping something from me.

I was brought back to reality when I heard Maffeo call my name. I ran down, weaving my way through the tents. It took just a moment to spot my father's tent. It was a good foot higher than all the others, and quite a bit larger as well. The storm reached us just as I entered. The tent shook violently, momentarily threatening to fly off. Yet somehow it held.

My father was deep in conversation with Maffeo and the leader of the merchant traders.

My father shook his head, “No, these people need their rest. Seven of our number has already been claimed by the desert.”

“We are over four hundred in total; even the Sand Devils would not attack a party that size,” Maffeo added.

“You know not what you speak!” he was interrupted by an ear-piercing screech. The man drew his blade. Just as he did so, three arrows appeared, protruding out of his chest. Then I saw the attacker, completely covered in black, his face obscured in shadow, all except for two gleaming red eyes. I had never seen anything so cruel, and terrible, in all of my many travels. If I had to describe them in poetic form I would say, “They looked like two burning coals from the deepest darkest part of the pits of hell.” But not even these words can truly describe what I saw.

Maffeo had grabbed the dead merchant's sword, and was now charging the Sand Devil, with a mighty battle cry. The Demon released another arrow, and by some miracle, Maffeo had blocked it with the sword. He was so surprised he was still alive, that he stopped dead in his tracks. The Sand Devil did not seem phased by Maffeo's luck and drew his own black sword.

My father had by now recovered his wits and rushed to his brother's side, sword drawn, ready for action. With the Demon temporarily distracted by my father and uncle, I drew my own knife, and acting on instinct, threw the knife straight at the black clad figure. Fortune smiled upon me as the knife hit the thing straight between the eyes. The figure screamed, unexpectedly burst into flame, and dissipated into thin air, leaving only my knife behind.

Suddenly everything went quiet. My father gave me an approving look after he had gotten over the fact that we had just seen a man vanish into thin air. We all walked outside. Maffeo gasped and muttered a short prayer. The storm had passed, but so had the lives of everyone in the camp. All that remained was the white skeletons of the dead merchants, and those of the hundred Christians we had brought with us. Father, Maffeo and I searched for survivors, but we found none; only the pale remains of the dead. Not even the donkeys and camels had survived. My Father was able to save the cask, containing the Holy Oil from Jerusalem, along with the letters from the Pope. Salvaging what we could, we set off again. I made a silent promise to myself that I would never return to that wretched desert as long as I lived...