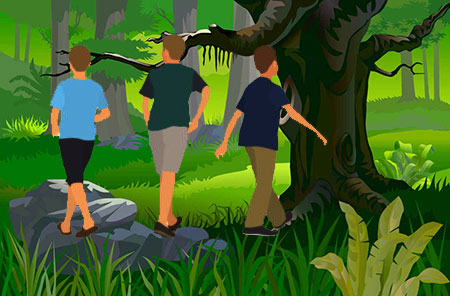 “Lost in the Wilderness” is one of the outstanding stories of the second biannual Short Story Contest 2016 written by Svetha Mahadevan, Singapore.

Lost in the Wilderness

David was the son of Captain John Stevens who was the chief of the ship “Prospetaria” that travelled continents carrying international passengers. His mother Lucinda brought him up in their hometown Manaus that was “The World Cup Host City.”

David had a good education provided by his mother because his father was always away on his ship. From childhood, David loved the stories of Greek heroes like Hercules, Samson, and Ulysses. Being inclined to adventure, he planned to go on a tour of the Amazon forest after completing his graduation. Lucinda reluctantly agreed to his plan, since he was the apple of her eye.

David and his friends were terribly happy and left for the office of the tourist agency. The Company provided them with a good boat, plenty of food supply and an expert guide who was a native fellow called Abraham.

On a pleasant Sunday morning, they left for the Amazon forest tour through Rio Negro tributary of the Amazon river. They were thrilled to travel in the tributary of the second largest river in the world, which is 3800 miles long, and in the dry season, is 5 miles wide. Piranhas, Dwarf Caimans, Giant Turtles, and Anaconda formed the marine life.

At a spot that the team thought was suitable, they anchored the boat. When they went inside the forest, they saw thick trees. Just then, they spotted an Anaconda that attacked them. All the five young and brave boys hit it with sticks and axes, but it did not budge an inch. It snarled at them. Finally, their native guide lighted a portable burner used to cook food and struck it at the Anaconda. It suddenly disappeared into the clear water.

After tying their boat for the return journey, they slowly ventured into the forest. After they walked nearly a mile, their guide let out a moan. When they turned around, they saw that he had fallen into a trench that was covered by dry leaves. The trench was deep and he could not get out. The team was in a dilemma. Suddenly they spotted ‘soldier ants’. The guide screeched, “Run if you treasure your life. Otherwise there will be only the skeletal remains of you.” They all ran, trusting that the native guide would be able to get out by himself somehow.

However, they were in for worse trouble. What they ran into was a trap set by the local cannibal tribe. In a flash, the boys were caught up in a net and raised until they hung in mid-air. The boys hung on for dear life through the night, and in the morning they were taken as captives. The friends were locked in the small wooden dungeon with a tribal guard.

The team decided not to give up without a fight. They knew they had to depend on themselves. David began to try to untie the rope that was used to bind him. After a lot of effort, he succeeded.

“Now let me help you with yours,” he muttered under his breath as he hurried undid his friends’ ties. They ventured out and tackled the guard with the karate moves they knew, known as the “Side Kick to Back of Head.” The guard died immediately. David and his buddies went to the tent of the leader. They went inside the tent and saw the leader sleeping. They could not believe their luck. As they sneaked out of the camp, their joy knew no bounds.

But then, they had lost all sense of direction. “Where are we going?” they wondered aloud. The boys did not have any magnetic compass. The sense of day or date was lost in the wilderness in its true sense. Then they saw a glimpse of a mountain, which was the famous Roraima. They began climbing the mountain. When they reached the top of the mountain, they saw a cave. Inside they saw a statue of Buddha bathed in the beams of sunlight. They prayed to the God for a good ending to their journey.

Meanwhile the guide, Abraham, who was saved by the friendly tribes, had gone to the tourist company and collected a rescue team and two helicopters. The rescue team and Abraham located the young boys.

David and his friends were praised for their bravery in the dense and terrible Amazon forest. And Lucinda felt truly blessed, to get her son back.