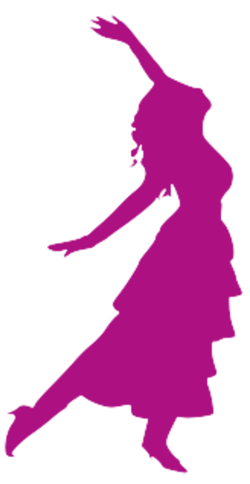 "Heavenly Dream" is one of the outstanding stories of the second biannual Short Story Contest 2016 written by Valeria Guinard, Republic of Panama.

She had fallen… Everything was blurry, but she could see bright pink and yellow lights peeking in. As her eyes focused on the scenery surrounding her, she noticed the room with high ceilings and marble floors. A chandelier hung beautifully in middle of the whole room and she was just below it. She would describe the room as the most elegant place she has ever been. Everything was so delicate; the wallpaper stood out with a flower print all around it.

But, she had fallen, and nothing hurt. A man extended his hand to help her up.

“You’ll get used to this soon,” he said with a smile, as music started playing. She knew the song; it was her favorite. There was nothing complicated about it, as it was just a simple piano melody. But, something made Camille feel nostalgic; it felt as if she hadn’t heard the song in years. A flashback came, and she saw a petite woman dancing along the cheerful melody. She was just beside the lady, stumbling lightly as she copied the moves. Camille laughed at the memory, while the man she had met earlier approached.

The crowd she had just seen gathered at one side of the room as they smiled reassuringly, but she did not feel nervous. Camille felt at peace. A song started playing. It was as joyful and lighthearted as the one before. The man held her hand and she closed her eyes, the music running through her veins.

She started with the simple moves she had been taught in the past and let her body do the rest for her. The song slowly became a dull one, but Camille kept dancing. Finally, it ended, and the man turned to her.

“Thank you, did I get the opportunity?” Camille gave him an anxious look.

“You hadn’t even danced and you were already in. We can see talent, and you clearly have it,” he said as she shrieked in excitement.

“Welcome to the family… I’m Matthew, dancing with you will be a pleasure,” he said and the crowd cheered. Camille felt relieved and smiled towards the crowd watching her. She could get used to dancing with a group; it was her dream after all. The people stood in pairs in previously assigned positions.

The crowd’s dancing skills impressed her. They did all kinds of styles she had never seen before, and they were not afraid to make the wrong move; they let it be. The variety of color in their dresses made everything look like it should’ve belonged to a painting, but it was happening and it was in front of her. Camille couldn’t believe she had the luck to participate in the dance; she didn’t even think she was good enough to be part of it.

As she started dancing, doing pirouettes and jumps she hadn’t done before, the emotion was too much to contain, and the energy felt like it was coming from within her. She connected with all the dancers combined; everything they felt at the moment, she could sense too. It was a magical event. Her body moved on its own and she really was not aware of what was actually happening or what moves she was making. Except for the last moment in the song in which she perfectly executed a grand jete, as far up in the air as she could. As she landed back again on the floor, a long beeping sound came out of nowhere and her black dress became a colorful one.

Somewhere else a light loses its brightness and a sob is heard. A dream is hammered, but nothing hurt.