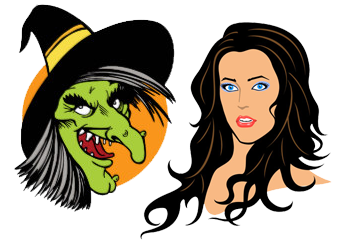 “Devil with a pretty face” is one of the outstanding stories of the second biannual Short Story Contest 2016 written by Jona Kong Zong Na, Brunei Darussalam.

Devil with a pretty face

Once, in a far away land, lived a king and his beautiful daughter called Yolona. Yolona was a wicked and black-hearted princess. She had learned black magic from a witch who lived in a hut at the deepest part of the forest nearby. Nobody except Yolona knew about her. Yolona often went to her hut when everyone was asleep. The witch had used her magic to make Yolona beautiful.

One day, the king decided that it was time for his daughter to get married. He sent letters to nearby princes and invited them to his palace to meet the princess. When she heard about this, she trembled in anger, for she knew that a husband would soon discover about the witch whom she always visited, and her beauty would soon vanish if anyone knew about the magic.

That night, when everyone was asleep, she sneaked out of the palace and went to the witch’s hut. Yolona told the whole story to the witch and sought help from her. The witch comforted Yolana, and told her of a hideous plan of turning every prince, who would come to see her, into a bead that would adorn a magical thread that Yolana could wear like a necklace. But if ever Yolona wanted to part with the necklace, she herself would disapper immediately, and be added as a bead.

Yolona agreed with that plan.

The witch then pulled out a long gold thread from an old wooden box. She put it around Yolona’s neck and told her not to take it off. She did not have to worry that someone might take the necklace off her neck by force, because the thread won’t break easily. The thread was so stunningly attractive that it would draw anyone’s attention, yet any true-blooded prince who would touch it would be strung along as a bead! They cannot escape unless the thread is cut.

The next day, the princess told her father that she was happy to meet any prince. The king was pleased and told her that Prince Dave from the richest kingdom in the world was arriving that very day. When Price Dave saw her, he was amazed by her beauty and agreed that she was a suitable wife for him.

The night before the great wedding feast was held, Yolona went into the garden and Prince Dave followed her. Yolona’s necklace shone so brightly under the moonlight that Prince Dave, who could not help admire it, was tempted to touch it. As soon as his fingertips touched the golden thread, he vanished into thin air in a flash. Yet on the thread was a glimmering crystal bead! Yolona laughed wickedly.

Soon, Yolona ran to her father and told him that Prince Dave had left her. Servants were made to search for the prince, but he was nowhere to be found.

That night, the princess’s maid Rachel was brushing Yolonda’s hair. It occurred to Rachel that her mistress was behaving unusually that night. Yolona kept on touching the bead with a wicked smile on her face.

Many handsome and rich princes came to the palace, and the same thing happened to them. Only Rachel saw the number of beads increasing on Yolona’s necklace everytime a prince vanished. Meanwhile, Yolona grew even more beautiful. No one guessed how wicked she really was.

Now, a prince called Robin was interested in marrying Yolona. He also happened to be a good friend of Rachel. Rachel begged Robin not to meet the princess for she knew that something was definitely wrong. Rachel told Robin what she had noticed about the princess.

Robin thought about what Rachel told him. He decided to find out the truth.

He visited the princess, and after the initial introductions were made, said, “You are very beautiful. But there is a girl who is more beautiful than you.”

Yolona did not believe him. “I want to see that girl for myself,” she said.

“Give me your necklace, then I will let you see the girl,” said Robin.

Of course, Yolona refused, and offered rubies and diamonds instead, but Robin declined all those.

The next morning, Robin went into the woods where he picked berries to make a necklace and kept the berry necklace in his pocket.

As he came back from the woods, princess Yolona wore her prettiest dress and went down to meet Robin.

“Good morning prince,”she said. “In the sunlight am I not beautiful?” She smiled sweetly.

“You are lovely but there is someone who is lovelier still,” the prince answered.

Yolona clenched her fists. “Surely you’ve never seen such shining beads as these?”

“I’ve never seen beads like yours but I like my neclace better,” Robin smiled as he pulled out the necklace from his pocket. “There is no necklace like mine anywhere in the world and it is magical too. This is the one that the girl who is more beautiful than you wore once.”

“Take it,” replied Robin. Yolona forgot the witch’s warning and lifted the necklace. In a flash, she vanished and the necklace fell to the ground. Another bead was added.

Robin asked his dervants to put the neklace in a box, and took it to the king. In the presence of the king, he cut it. Then he pulled the beads out one by one and each prince appeared!

The last bead was the bead that had trapped Yolona, but the king stopped Robin from taking Yolona’s bead out from the thread.

The king said that his daugher should be punished. He hung that single bead with the thread outside the palace.

When the gold thread with the single bead swings and glitters, everybody knows that it is the wicked Yolona, the beautiful but evil princess. The devil with a pretty face.