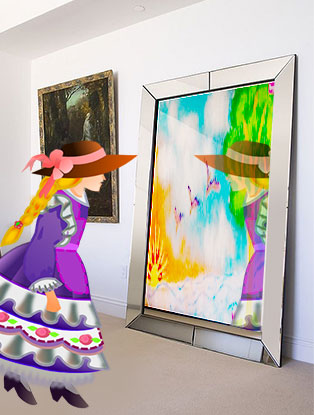 “Chloe and her Mirror” is one of the outstanding stories of the second biannual Short Story Contest 2016 written by A. Sanjay, Singapore.

Chloe and her Mirror

Chloe had just moved into her new house, with her single mother. Sadly, she hated it because she missed her old friends, neighbors, and all that an eleven year old would generally fantasize about.

“Ok dear, do you like our new house?” asked her mother, but there was no reply.

The four-hour long drive from the previous location, along with the process of packing up her belongings had her completely exhausted.

Understanding her daughter, the mother then suggested to Chloe, to explore the new house, while she and the delivery agents began to unpack the stuff from the truck.

Nodding to her mother’s proposal, Chloe looked around and went upstairs, towards her bedroom. She found a large closet in her new bedroom, and as she opened it, she found herself in front of a large wall mounted mirror. Curiously, she began to examine the mirror, wondering to herself why the wall-mounted mirror was kept locked inside the closet.

She then quickly noticed that the reflection on the mirror seemed different. Through the mirror, she noticed the summer light shining from the window, the birds chirping, and the entire background being very cheerful and bright, whereas in truth, her surroundings were dull, gloomy, and filled with dust and spider webs.

Surprised, she drew her hand gently towards the mirror, and on the first touch, she felt something strange. Her hand felt cold and wet, but before she could even observe her hand, she was pulled into the mirror, by a very strong, yet gentle force. Chloe, then stood up, and found herself in a new world.

She could see tall buildings floating in thin air, like a surfboard floating on water. The place also had hover buses skimming from building to building, like a frog hopping from lily pad to lily pad. And, as she was glancing through, she read a notice in bold letters, “WELCOME TO PLANET CROTH 63C”.

Filled with curiosity, she began to move steadily, only to be stopped by a person. Chloe was terrified,

This was the first person she had met in CROTH 63C.

“Hello girl, how did you enter this planet?” came a voice from the other end.

Chloe calmly replied that she was pulled in by the mirror, she had found in her new house.

“Hmm..I am Chloe,” was the reply, and the man, on his part, introduced himself as Julian.

Chloe wanted to know more about Julian, so that she could befriend him in this unknown world.

“So Julian, tell me. Were you the only human here before my arrival? How did you come here?” enquired Chloe.

“Ah, well it's a story that is similar to yours. I was pulled by a strong wind into this place, as I was returning from work one fine day. I was quite early to return that day from work, as my wife was about to give birth to our first child.” replied a sobbing Julian. Chloe felt sorry about his situation, and gave him a hug. “I have not seen my wife and my child for years together,” he continued.

Chloe was then suddenly reminded of her mother, and was terrified about the thought of her being stuck in this unknown world forever.

“Let’s find out a way to escape,” said Chloe, “after all we cannot be stuck here forever like this.” “I have heard of a place called Spookie that has a huge tunnel, which can lead us back to where we came from, BUT it is guarded by a scary baboon,” said Julian.

“Great. If that is the only way to escape, then we are left with no choice,” replied Chloe.

Therefore, Chloe and Julian got on a hover bus and went to Spookie. They reached the tunnel in no time, but as they were nearing the entrance of the tunnel, the land began to shake vigorously. As Chloe and Julian turned to look at what was going on around them, they noticed the large baboon, screaming aloud and coming at them angrily.

Julian carried Chloe, and began to run as fast as he could into the tunnel. And in a minute or two, SPLASH! Julian and Chloe found themselves just beside the mirror in Chloe’s bedroom.

“Chloe, Chloe, what are you up to?” came a voice from outside the room. It was none other than Chloe’s mother, and as she entered the room, she was both shocked and happy, “Julian!” she said, and running towards him, she gave him a hug.

“Where have you been for all these years? You were rumored to be dead. I thought you had left me and Chloe alone forever in this world.”

“Darling!” he said, hugging and offering kisses to Chloe and her mother, “I was carried by a strong wind to a different planet, and I met Chloe there, when she was also carried to the same planet by this mirror.”

Chloe’s mother could not control her feelings after being reunited with her husband. Chloe took some time to understand what had just happened. She was so happy that the family was united again. It was now, that she realized that “Family is not an important thing; it is EVERYTHING.”