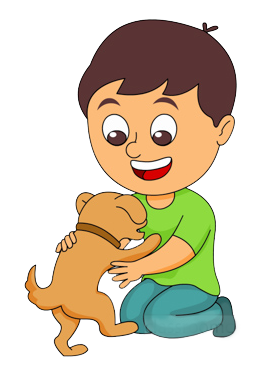 “Charlotte and Me” is one of the outstanding stories of the second biannual Short Story Contest 2016 written by Timothy Widjaja, Australia.

On a cloudy winter night in Los Angeles, a man came home late from a local casino, drunk and broke. His son Toby, a 10-year-old boy, was almost asleep at that point until he heard his mother's voice, shouting at the father. The boy would never know what kind of argument his parents were in, but, what he would know, was that his parents would separate, and he would have to pick between his mum, and dad.

After separation, Toby lived with his mum, Linda, in a small cottage. He loved animals, especially dogs, but his mum despised them. Behind the cheery smile that he always put on when he was in front of his friends and family, Toby's heart was broken, and full of loneliness. His mum always came home late, so he was always stuck at home, bored, with nothing to do.

One Friday, as Toby got home from school, he heard a loud crash. He dashed to the place where the accident happened, and there, was a helpless puppy who had just been hit by a car.

Toby walked up to the puppy, and saw that her left paw was broken, so she was unable to walk. As Toby looked up, he saw a car, speeding his way. Toby picked the puppy up just in time before the car sped off into the distance.

Carefully, Toby brought the puppy home, gave her warm milk, and wrapped her left paw in bandages. He secretly hid her in the garage under some old blankets, because he knew that his mum hated dogs. Just as he was about to exit the garage, he turned around, and said to the puppy “I'll name you Charlotte.” Then he switched the light off and closed the door.

Later that night, he called his dad, Jim, and told him all that had happened that afternoon. His dad told him to bring Charlotte over when he visited his house on Saturday, and that he would look at it.

Saturday quickly came, and Toby put Charlotte into his bag with his clothes. He told her to be quiet as his mum took him to his dad's house. As Toby arrived at his dad's house, he gave his mum a goodbye kiss and sprinted off to meet his dad. Slowly Jim took Charlotte out from the bag and examined her. He told Toby that her left paw was broken and he could help by plastering the paw properly. Toby gave his dad a hug and went off to play with Jim's big dog, Bob, just as he did every week. His dad then started plastering Charlotte's left paw.

When he had finished, he called Toby to show him the plastered paw. Toby looked at the pink and yellow plastering and thought that it was awesome. From then on, he thought of his dad as a hero and an inspiration. His dad also told him that he no longer visited the casino. At night, Toby prayed to God and asked Him to forgive his sins and help his mum and dad to get back together.

A few nights later, when Toby and his mum were fast asleep, the door silently creaked open as two people wearing masks came in. Charlotte was still awake, and she noticed those two shady characters. She went into Toby's room and started licking his face. Toby woke with a groan. He knew something was wrong and followed Charlotte as she began walking out of the room. She then pointed in the way of the two men.

Toby silently walked into his mum's room. He woke her and told her what was going on. She immediately called the police to inform them. Two minutes had passed, but the police were not in sight. Toby and his mum were hiding in the closet. Then, the bedroom door opened. In came one of those men holding a gun. He began searching around the room for anything valuable. In the distance, there was the police car with the siren ringing loud and clear. The men quickly took what they could, and ran away. However, they were not fast enough, as the police found and arrested them.

Toby and his mum were later informed by the police officers that those people that had broken into their house were wanted for murder. Linda asked Toby how he had woken up. Toby said it was his puppy named Charlotte who woke him up. His mum angrily told him that he was not allowed to have dogs. However, her mind soon changed after she saw Charlotte's cute face and remembered what she had done that night. She told Toby that he could keep Charlotte, but only if he would train her properly. Toby accepted, and they went inside with a huge relief.

The next Saturday, Toby was driven to his dad's house again. A few nights earlier, Toby had rung his dad and told him what had happened, and that he should ask mum out, because she was now in love with dogs. Therefore, when they arrived, Jim came out to greet Toby, Linda and Charlotte. He then asked if he could speak to Linda privately. Toby heard his dad whispering about a date, and his mum gladly accepting it. A couple of weeks later, Toby screamed out in delight, as he was told that his parents had agreed to give their marriage another try. From that moment on, Toby's heart was mended.