Short Stories » How Alex The Lion Cured His Hiccups 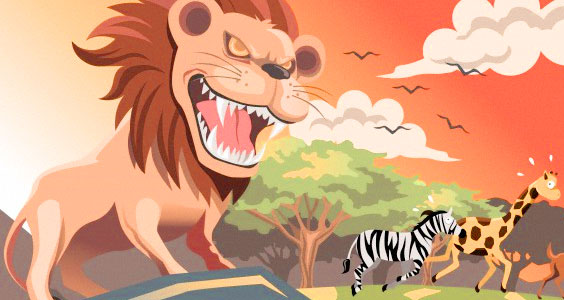 How Alex The Lion Cured His Hiccups


Alex the lion lived in the jungle. He was big, strong and had a flowing mane. He also had the mightiest and loudest roar in the jungle, and one, which could be heard for miles around. Alex was indeed a splendid creature, but he was depressed and terribly unhappy. He suffered from a small problem that he was not able to solve. Alex had recurring bouts of hiccups.

It was a bad case, because it never left him. It followed him everywhere. It affected his hunting, stalking and even when he was relaxing. Alex was ready to try just about anything to cure his hiccups.

At first, Alex just ignored them, thinking that it would go away after a good night’s sleep. However, he was wrong. The moment he woke up the next morning and had something to drink, it would start again. Alex grew terribly depressed day by day.

One morning, when the hiccups resumed, he decided to clamp his mouth firmly and thought, “I shall not open my mouth and the hiccups will not be able to escape.” Although, it did stop for a few seconds, the hiccups sneaked through his gullet and resumed violently. Poor Alex, he just did not know what to do. He became even more depressed.

He went to see his friend Melman the Giraffe. He thought as Melman had a long neck, he surely would have an answer to his problem.

“Hello Alex, why are you so quiet today?” asked Melman.

Alex shrugged despondently, “I have got the hiccups, and I have just about tried everything. It just does not seem to go away. Perhaps, you can suggest a way to get rid of them,” said Alex.

“Hiccups,” said Melman, “What in the world are they?”

“Oh dear me, that is really peculiar. You do seem to have a problem there,” said Melman the Giraffe.

“What can I do about it?” asked Alex. “Do you know of any solution to my problem?”

Melman the Giraffe pondered for a while and said, “I think you have this problem, because you have such a small neck. If you had a long neck like mine, I don’t think you would ever get this problem. Do you think you can make your neck a bit longer?”

“No,” growled Alex angrily. “Besides, I like my neck the way it is.”

“Too bad,” said Melman the Giraffe. “I think you would then be stuck with the hiccups.”

Melman got a bit curt and walked away, leaving Alex behind with his hiccups.

Just then, Bono the rabbit happened to dart across.

Bono looked at Alex and trembled.

“Don’t be afraid of me,” thundered Alex. Just then, he got a bad attack of his hiccups. The hiccups interrupted their conversation.

“I need some advice,” said Alex. “Do you know a method to get rid of these hiccups?”

Bono the rabbit watched curiously and said, “You are a big and mighty lion. Why don’t you frighten them away?”

“By roaring, of course.” Said Bono.

Between hiccups, he let out two mighty roars. Roars, so powerful, that it shook the jungle. Bono ran off, when he heard the echo. Even, Alex got a bit frightened. For a minute, the hiccups stopped, and Alex was thrilled. Then a minute later, he felt the familiar twitch and it again re-started.

Alex, searched for Bono, but he was nowhere to be seen. He realized that there was no point blaming Bono.

Bambi, the deer who was watching all this came and told Alex that it was stupid if he thought he could frighten the hiccup off with a roar.

“Then how do I get rid of them?” asked Alex desperately.

“Well, by running away them of course,” she said. “Whenever something bothers me, I just run away from it.”

Alex thought about this for a while and it seemed like a good idea. “Perhaps, if I run fast enough, I could get away from the hiccups,” he thought.

And so, Alex started running. “Faster, faster,” said Bambi, who was running beside him.

Alex ran with all his might with his splendid mane flying through the air, and all the animals giving way for him. Alex ran until he was exhausted. Wearily he sat down and noticed that his hiccups had gone. “I have done it at last,” said Alex.

He went down to the stream for a drink and drank until his stomach was full. No sooner, he finished drinking, the familiar twitch returned, and the hiccups started again.

Poor Alex, he burst in to tears. He was sobbing so hard between his hiccups, when Smarty the Jackal passed by and could not help wonder the reason for Alex’s sadness.

Alex then narrated his tale of woe and Smarty the jackal started laughing so hard, that made Alex angry.

“You know, what your problem is Alex? You have hiccups because you don’t laugh enough,” said Smarty.

“How can I laugh, when there is nothing funny to laugh about?” quipped Alex.

“Well, there is always something funny to laugh about. For example, who has ever heard of a lion with hiccups?” said Smarty, and he started laughing.

Alex thought for a while and Smarty’s laughter was so infectious that he too could not help laughing.

He laughed so much that he was rolling in the ground with laughter.

Suddenly, Smarty said, “That was fun wasn’t it, and did you notice that your hiccups too have vanished?”

Alex got up with a start and realized that what Smarty said was correct. He waited for a minute and it did not reappear.

“I have got rid of the hiccups and began to laugh all over again,” he cried.

To this day, Alex did never have hiccups, although he laughs a little every day, just in case they might strike again.

« Back to MenuNext Story: The Brave Little Boy »