Short Stories » The Tale of the Dog, Cock and the Fox 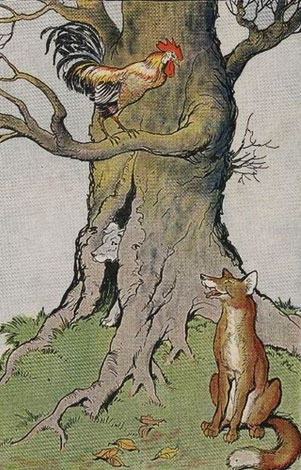 The Tale of the Dog, Cock and the Fox


A dog and a cock, who were the best of friends, decided to leave their farm as they wanted to travel and see the world.

They were curious and wanted to see what was there beyond their farm. So, they decided to leave the farmyard, and set out along the road that led to the woods, that would lead them on their path to see the world. The two friends were extremely happy about their decision to travel to see the world, and were hoping for many adventures on their way.

As night approached, the cock, searched for a place to roost as was his usual custom. He spotted a tall, hollow tree, on the border of the forest, and felt that the tree would be an excellent place for spending the night. The cock also thought that his friend, the dog could sleep inside the hollow base of the tree. And as per plan, the dog slept below, and the cock flew to one of the branches, and spent the night there. Both having found a safe and nice place to rest, they slept comfortably.

As the first glimmer of dawn approached, the cock forgot for a moment where he was. He woke up thinking that he was still at the farmyard. As it was his duty to arouse and wake the rest of the animals at the farm at daybreak, he stood tip-toes on the branch, flapped his wings, and crowed proudly. Having crowed two or three times, he suddenly realized that he was not at the farm anymore, and stopped crowing.

However, the damage had been done, and instead of waking the farm animals and the farmer, he had awakened a fox, who was not too far in the woods.

The fox was hungry as he had not eaten anything the previous day, and was on the lookout for a prey. He saw the rooster perched high on the tree, and had rosy visions of a delicious breakfast. However, the fox noticed how high the cock was positioned, and was thinking of a plan to bring down the rooster, so as to kill him for his breakfast...

He immediately hurried to where the rooster was, and said very politely” a humble welcome to our forest, dear sir! I cannot tell you how happy I am to see you in our forest. I am sure that we can become the best of friends."

The cock realizing that something was afoot, asked the fox, “why, how can that be possible?”

The fox very calmly told the rooster, “Have you not heard about the new decree of peace and harmony that was recently issued by the lion, the king of the jungle.”

The rooster replied “no, I haven’t, but what is this decree all about?”

The fox added that the new treaty issued by the king lion, emphasizes that, all beasts, birds and every other creature in our forest, shall not hurt each other, but instead, should live in peace and universal brotherhood”.

Hence, we are not supposed to hunt, hurt or prey upon one another, but instead live in peace and harmony. So, please do come down and we can discuss this matter of such great importance.

By now, the rooster had realized that the cunning fox was up to something and did not say anything, but kept looking at the bottom of the tree, as if he was searching for someone.

Noticing this, the fox asked the rooster, whether he had lost something or searching for someone.

The rooster replied that he was flattered to hear the new decree and requested the fox to go to the bottom of the tree and wake his friend, and convey this news to him.

The hungry and unsuspecting fox, thinking that there were other roosters down below, rushed to the tree’s hollow, as advised by the rooster, and was a bit taken aback to see the sleeping dog.

Noticing the dog, the fox immediately started running to the forest.

The rooster called out to the fox and said, “Please don’t go… the dog was his master’s pet, and that he was also a good friend of the rooster’s.”

The rooster continued, "I was just on my way down. We shall wait for my friend the dog, to wake up, and we shall discuss about this new treaty that the king lion has issued, and celebrate the new reign of universal peace.”

The fox who, was already on the run said, “I would be happy to meet and greet your friend, but I am afraid, that he may not have heard about the king lion’s new treaty of peace.”

Moral: It is obvious that cunning often outfoxes itself, and that those who try to cheat others, would likely be paid in their own coin.

« Back to MenuNext Story: The Tale of the Foolish Gardener »