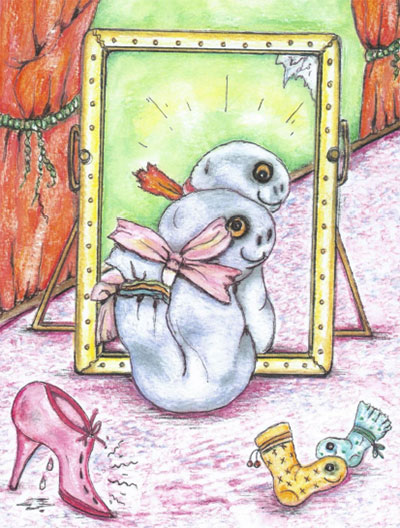 There was, and always had been, a certain vain side to Sock.

Every time she passed by a mirror, she would stop to admire her reflection in it, although, not being a fan of washing machines with water IN them, her reflection was quite often a grubby one !

“Ooh, don’t we look pretty today !” said Slippers, nudging each other, and smiling craftily between themselves.

“Prettier than you!” retorted Sock, and tried to adjust her ribbon, which fell to the floor.

The Sock Children, always planning mischievous antics, were listening with amusement, hiding behind the living room door. A practical joke had formed in their naughty little minds! What on earth could they be up to now ?!

The Sock Children had received a secret message the day before, from their outing to the Sock Club.

Sock, however, had not been invited on this occasion, as this was to be a surprise.

Cousin TwinTwin, whom Sock had not seen for a while, was coming to pay the whole family (including Shoe Sweetheart), a visit!

This was going to be very exciting as TwinTwin didn’t visit very often, because she bore such a striking resemblance – to Sock !

There was only one way of telling them apart really, and that was if one was wearing a different coloured ribbon to the other!

“Even I get confused!” Uncle Doc Marten had admitted, while Big Boot and Slippers just nodded their heads in agreement.

TwinTwin was to meet the Sock Children that evening at “Washing Machine Entrance” (at teatime, when the humans would be in the dining room, of course!) and the plan was to play out the practical joke on vain Sock, and see if she could tell the difference, with the mirror removed from its frame, and almost-identical cousin TwinTwin standing on the other side of it!

“This should be fun!” said Slippers. “I wonder if she’ll notice anything different?

What do you think?”

“I think you’re all being really, really horrible!” said Shoe Sweetheart, and burst into tears, making her heel wobble.

“Can you help us to remove the mirror from its frame?” asked a Sock Child.

“I’ll help ! “ said Big Boot, clearly having the strength to do so.

Big Boot and Sock were NOT the best of friends!

As the mirror was in the hall, and not hanging up, but on a stand, it was easy to remove the glass by a gentle kick in each corner, making the glass come away easily, leaving just the empty frame in place.

“That was easy enough to do wasn’t it it!” said Big Boot proudly.

“No ! “ replied Shoe, and everyone laughed.

The washing machine door had been left open, so there was no danger of her being caught up in a spin-dry! (which was just as well too!)

“Hello everyone!” TwinTwin greeted her friends with the excitement shown by someone who hasn’t seen their best friend for at least a year!

TwinTwin had a good memory. She remembered the times that SHE had been the butt of some (rather cruel) jokes that Sock had played on her in the past……… but that’s another story.

“If you stand here, behind the mirror frame, Sock will be admiring YOU, and think it’s HER reflection instead!” the Sock children explained. “She probably won’t even notice the different colour ribbon!”

It was quite unusual really. TwinTwin wasn’t vain at all! Sock wore a pink ribbon, but TwinTwin was wearing a red one.

Neither Sock would win the the “Most Clever Sock of the Year” competition, or the gold rosette which was first prize.

TwinTwin stood behind the ‘mirror’, trying not to laugh or giver herself away.

The Sock Children went to find Sock, who was deep in conversation with WellyBoot.

“There’s something inside your nostrils. It doesn’t look very nice” said one of the Sock

Children. “Looks like runny chocolate!” the other one piped up. “You’d better come and have a look! NOW!”

“REALLY?” she asked. Sock knew then that she had been caught out.

She did love her chocolate !

Going into the hall, she glanced at herself in the mirror.

However, TwinTwin did NOT have chocolate nostrils, and Sock, being Sock, was so vain that she even failed to notice that the ribbon she was wearing was a different colour in her “reflection”!

“I don’t have any chocolate in my nostrils!” she said crossly.

The Sock children just stared at each other in disbelief. TwinTwin didn’t dare move.

“I know what you’ve done !” said Sock, suddenly gleeful. “You’re planning a surprise chocolate party for me and Shoe, aren’t you ! Oooh !”

The plan had clearly backfired, or Sock was not as silly as everybody had thought.

So that should mean that there would be no revenge practical joke played back on the Sock Children.

(And what about POOR TwinTwin!)

« Back to MenuNext Story: Sock Goes to School »