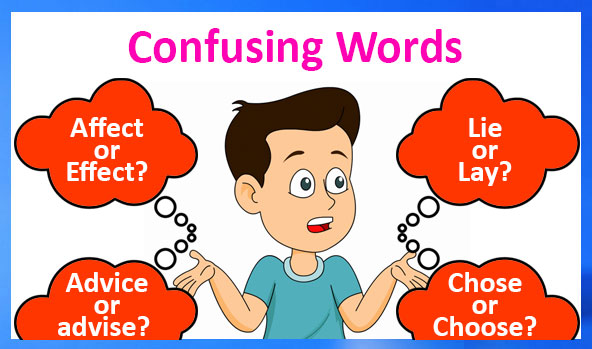 Words that are confused often by English learners

Many users of English find it difficult when they have to choose between two words which are very similar in spelling, but different in meaning. Given below is a list of such words with their individual meanings. This is sure to be a guide for your confident use of English, both spoken and written.

advice – an opinion or suggestion (noun)
advise – to tell somebody what to do (verb) access- a way a reaching a place, a right to use something
excess – more than necessary accept – to take what is offered
except – not including affect – to change or make a difference to
effect – a result; to bring about a result aisle – a passage between rows of seats
isle – an island all together – all in one place, all at once
altogether – completely, on the whole aloud – laugh or speak out loud
allowed – permitted altar – a sacred table in a place of worship
alter – to change alternate – one after the other
alternative – another choice aural – relating to the ears or hearing
oral – relating to the mouth; spoken bear – (verb) to carry; to put up with
bare – (adjective) naked; to uncover bow – to bend the head, the front of a ship
bough – a branch of a tree birth – the event of a baby being born
berth - a bunk in a ship, train etc. born – having started life
borne – carried break – damage and separate into pieces; a pause
brake – a device for stopping a vehicle; to stop a vehicle breach – to break a rule; a gap
breech – the back part of a gun barrel brooch – a piece of jewelry
broach – to raise a subject for discussion serial – happening in a series
cereal – a breakfast food made from grains cast – to throw
caste – divisions in society among people cord – a length of string
chord – a group of musical notes course – a direction; a school subject; part of a meal
coarse – rough compliment – to praise or express approval; an admiring remark
complement – to add to, so as to improve (verb); an addition that improves something (noun) conscience – a part of the mind that tells us right and wrong
conscious – aware counsel – advice; to advise
council – a group of people who manages or advises others current – happening now; a flow of water, air or electricity
currant – a dried grape dessert – the sweet course of a meal
desert – a waterless, empty area; to abandon someone discrete – separate and distinct
discreet – careful, not to attract attention disinterested – impartial
uninterested – not interested draft – a first version of a piece of writing
draught – a current of air drawer – a sliding storage compartment
draw (noun) – an even score at the end of a game duel – a fight or contest between two people
dual – having two parts illicit – illegal
elicit – to draw out a reply or a reaction forward – onwards, ahead
foreword – an introduction to a book grizzly – a type of bear
grisly – gruesome, revolting horde – a large crowd of people
hoarde – a collection of things, especially kept in a secret place lamp – an object emitting light
lamb – the young of a sheep loan - something lent
lone – solitary lose – to be deprived of; to be unable to find
loose – to unfasten; to set free; not fitting lain – past participle of ‘lay’
lane – street litre – unit of measurement of volume of liquids
litter – throw waste material around law – rule
low – small in amount or degree maid – domestic help
made – created maze – labyrinth
maize – a kind of grain mole- an animal; a permanent mark on the skin
mall – a shopping complex nun – a female monk
none – no one night – what follows the day
knight – to be given the title of a ‘lord’ by the king or queen pale – faded
pail – bucket palette – a board used in art for mixing colours
palate – the roof of the mouth peddle – to sell goods
pedal – a foot-operated lever (n); to turn or press the pedals (verb) peace – a state of non-violence
piece – a part of something peer – to look closely
pear – a fruit plait – braid
plate – a flat holder for something poll – voting in an election
pole – a long slender piece of wood pore – a tiny opening; to study something closely
pour – to flow or cause to flow practise – to do something repeatedly, to gain skill
practice – the use of an idea or method; the work or business of a doctor, dentist etc. pray – to ask for God’s blessing
prey – something that is hunted and eaten; victim principle – a fundamental rule or belief
principal – most important; the head of a school prawn – a shellfish
prone – likely to be affected by something (e.g. a disease) price – the value of something
prize – a present earned by winning a competition quiet – being silent
quite – very, remarkably reminder – something that reminds you of something
remainder – left over right – true, correct
rite – ritual, ceremony rod – stick
road – a path root – the part of a plant underground
route – path to a place sent – past tense of ‘send’
scent – fragrance site - a location
sight – the ability to see sore – hurting; blister
soar – fly high stationary – not moving
stationery – writing material story – a tale or account
storey – a level of a building tail – rear part of an animal
tale – story tied – past tense of ‘tie’
tide – the rise and fall of the water level of the sea weak – not strong
week – seven days from Sunday to Saturday weight – how much something weighs
wait – stay somewhere expecting somebody or something weather – the climate of a place at a particular time
whether - if wail – cry loudly
whale – a sea animal waste – (n) something that is of no use; (v) to leave things unused
waist – part of the body between hip and chest

« Back to MenuNext » Christmas Words