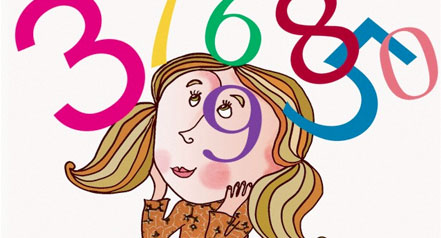 People unfortunately do not treat math as fun. That is the [root] of all their [problems].

Of course, mathematics plays a significant role in many fields, be it science, engineering, medicine, economics or just about any subject. Mathematics originated from the Greek word mathema, which signifies study, learning, or science. In America, mathematics is popularly known as math. According to them, they feel that mathematics functions as a singular noun, hence the name math.

We have tried and collate information that range from facts on numbers, basic math, geometry, famous mathematicians, history, and most topic s covering math. There are details on how to find the area of a circle, and the definition of a googol. So dive in and have fun, reading funny and amazing facts on math.

It is believed that Ancient Egyptians used complex mathematics such as algebra, geometry, and arithmetic as far back as 3000 BC. However, notches (cuts or indentation) on bones verify that humans have been “tampering” with math since around 30,000 BC. Now, that is a long time!

However, our numerical digits were created and developed about one thousand years ago. It is primarily a Hindu Arabic numerical system. However, it was not until the 16th century that most mathematical symbols were invented.

Are you aware of the magic of the number nine? You can multiply any number with nine [9], and then total all the individual digits of the result to make it into a single digit. Have you noticed that the sum of all these individual digits would always be nine?

Did you know that there are different names for the number 0? They include zero, nil, naught, nought, zip, nada, and zilch? Another interesting fact - FOUR is the only number in the English language that can be spelt with the same number of alphabets as the number itself.

Did you know that the number 40 or [forty], is the only number that can be written with letters in the alphabetical order? Are you familiar with the word Googolplex? It is actually the number 1 followed by a googol number of zeros. In other words, the number one followed by one hundred zeros and is a number so ridiculously big.

You might have come across the word infinity. Are you familiar with its symbol? It looks more like the number 8 placed on its side. However, infinity means a limitless or infinite sum or something that goes on forever and there is no end. It cannot be classified as a number, but is frequently used in math as part of calculations and formulas.

Did you know that;

Assuming that a pizza which has a radius of [z], and a height [a]. In which case, it will have a volume of [Pi × z × z × a]. This is because the area of a circle is Pi multiplied by [z] squared, multiplied by the height [a] to get the total volume – There you are Area = Pizza!

Last, but not the least, the number 5 is pronounced as 'Ha' in Thai language. Hence, 555 is also used by some as slang for [HaHaHa].

We hope you had fun checking out our amazing facts and interesting information on math. Have a nice day!