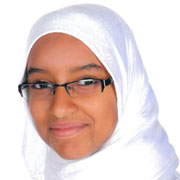 “Through Their Eyes” by Muram Mutwakil, is the First Prize winning story in the senior category of the first biannual Short Story Contest 2016.

I woke up slowly, my frail hands falling to my sides. I looked up, gazing at the shadow cast on me, outlining a female figure. I turned around to look at her: She was as beautiful as ever. She wore a sleeveless white dress with a golden belt. Her hair was long, straight and chocolate brown put in a braid over her shoulder; her face was olive, with bright almond eyes and thin lips.

Most people kept their distance from her because of her bizarre obsession with nature: After all, she was the founder of the Cloven Pan Organization. But I found it fascinating that whenever she fixed her mind on something, she never backed out.

Every day she would pass by my home, filling it with her scent of wild berries, provide me food and water, and keep me company by raving about her mission and how she wished to achieve it. Normally, she'd stay with me from sunrise to sunset. I always asked if she had any important work to attend. She always answered with a soft smile saying, "I do, but you take priority."

She arrived in the morning, and did not have the usual warm smile. Her hands were shaky and breathing was unsteady: She looked like she had seen a ghost. She approached me slowly and spoke softly, sniffling in between "I'm very, very sorry. But I won’t be able to see you ever again." The realization hit me like a hurricane.

Two moons ago, she was discussing something with two middle-aged men in black suits. It started as a small argument and developed into a heated debate. I couldn't hear what they were saying, but I caught the end of their speech,

"We can't do anything about it.”

"YES YOU CAN! Convince your manager to stop it right now!"

"But ma'am, this is a case of national-"

"IT DOESN’T MATTER! My family's lives are at stake!"

"They're my family, no matter what they are!"

The other man spoke up in a ruder tone, "Listen, lady, we know you care about your 'family', that's great. But we're talking about a growing country here, we must-"

Her body tensed up, but her face showed confidence.

"Let me talk to your manager, he'll decide what will happen."

They looked like they wanted to argue, but agreed to take her. She got into a black sports car, took one last glance at me and then they drove away.

I didn't see her after that, until now.

She opened her mouth in an attempt to explain her situation, but no words came out, only sniffles and sobs. I couldn’t bear seeing her like this. “We’ll figure something out, we always do,” I said in an attempt to cheer her up, but she couldn’t hear me. A rumble bellowed in the distance, trucks and tractors appeared, singing their song of destruction. She ran away, without saying anything. I felt abandoned, alone and terrified, but tried to be brave and take in the scene.

Tractors surrounded us in every direction; men with blades, ranging from pocket knives to axes, walked around laughing wildly. Screams were muffled by engine roars. It was too much for me to handle. The rest was a blur.

I am anxious to wake up. I do not know how long I have been out, or if I am dead or alive. I squint, and the sunlight blinds me. "It's.....gone." I mutter to myself. All I can see are feet, sprinting to get to their destination, and tall towers that reach to the moon. Everything is grey and boring. I am the last one. They're all gone, even her. No, wait, I can see her. She is sitting on a teal bench next to a cafe. She is wearing cotton "Cloven Pan Organization" shirt and simple blue jeans, her hair tied in a bun, and her eyes swollen from crying. Opposite to her sits the man in the suit from the other day, a rather glad look on his face. I can’t make out what they are saying, but their facial expressions say it all.

She seems to out her feelings, and he nods sympathetically. He then takes out a notepad and starts asking questions and taking notes. She keeps her feelings in check and answers them gravely, but avoids a couple of them.

After half an hour, they bid their goodbye and go on their way. I can see her getting further and further down the road, until she disappears into an old house with a truck out front. She leaves with my hopes and dreams. I can't follow her, nor walk behind her. I am just a small tree, rotting in the sunlight, surrounded by weeds.