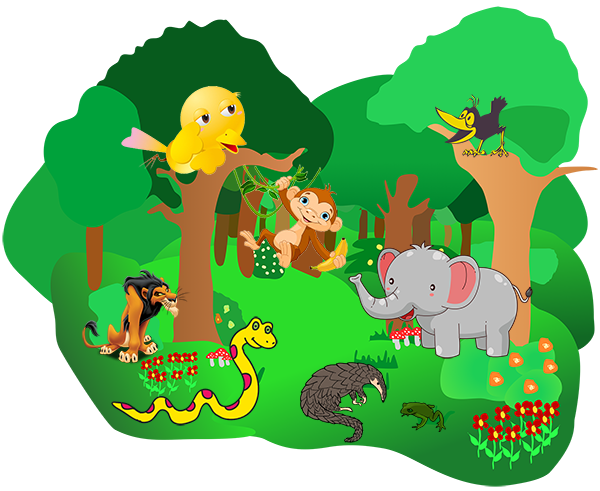 "The Wise Sparrow” is one of the outstanding stories of the first biannual Short Story Contest 2016 written by Aditi Vishwanath, India.

Once upon a time in a huge forest, lived four animals named Jaggu the monkey, Jumbo the elephant, Serpent the snake and Jill the crow. They never lived together with happiness. All of them were proud about their qualities and were jealous of each other. Jaggu was proud that he could jump from one to another tree. Jumbo was proud about his huge trunk and sharp tusks. Serpent was proud that people were afraid of him due to his venomous bite. Jill was proud that it could fly high and see everything around the world.

Once, a meeting was held and all the animals gathered to take a few decisions. These four animals were also present there. Rollet the wise sparrow addressed the gathering, “Welcome to all the animals present here. We have to identify the new Head of the jungle as the king lion has passed away. We have to choose someone among us who has great qualities.” Hearing this, all the animals started boasting about their qualities. Jaggu said that it could help anyone in need by jumping through trees speedily. Jumbo said that it was a mighty animal in the forest and could keep all the animals safe from any attackers. Serpent disagreed with others and said that if it was sworn in as the king, it would keep all the animals happy because no one will dare attack them, being afraid of the serpent. Jill also boasted about its sharp beak and soft feathers.

But Rollet the clever sparrow made a plan. It had told all the animals that there would be a few tasks assigned to all those who aspired to be the next forest Head. He did not elaborate on the plan. He asked them all to assemble again at the same place after two days. All the animals were curious to know what it could be.

After two days, all the animals assembled there again curiously to know about the special test. Rollet announced, “Welcome to all the animals. Hope you all have assembled here curiously to know about the special test. As we all know, the Lion’s enemy is Hyena; today we have to fight and kill it. Those who become successful in this test will be sworn in as the king of this jungle.” Hearing this all the animals were in fear. They were afraid of taking on the Hyena, knowing that only the Lion could only do that.

Thinking of their limited powers, they wondered how they would kill the Hyena. But Jaggu said, “I can catch the Hyena by jumping trees but I don’t think I can fight with it.” Jumbo too said, “I can hurt the Hyena with my long trunks and sharp tusks but I can’t kill it.” Serpent agreed that it could fight and kill the Hyena only if it was caught and brought to it. Jill said that she could accompany Jaggu and Jumbo in catching and hurting it but couldn’t kill it. Then they realized that only if they work together, they can face challenges. They all accepted that they weren’t much powerful individually, but they could do together any powerful task.

The sparrow said, “See, if you are united, then there is no need of any king for the protection of this jungle and we can live happily. So, be united, instead of being jealous of each other and leading a selfish life.” Everyone praised the sparrow for its cleverness and thanked it for opening their eyes.

From then onwards, they were happy together and were not jealous of other animal.