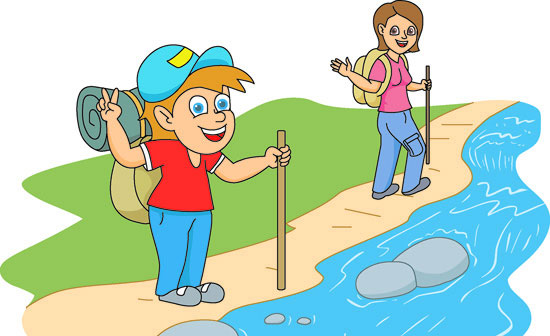 “The Vacation” is one of the outstanding stories of the first biannual Short Story Contest 2016 written by Nassim Ashraf, Egypt.

Once, there was an adventurous girl called Girsy. On one of her school vacations, she went camping with her family.

One of the days during camping, Girsy decided to discover the secrets of the woods. As she was exploring around, she came across bush fire. Fearing for her life, she ran and ran, till she reached a stream.

Luckily, she had a small axe in her black bag, as she had planned to cut some wood for her science project, while camping. She used the axe to cut a tree. She made a bridge out of the wood, and tried to cross the stream. But midway she slipped and fell into the stream.

"What a day! What bad luck!" she thought to herself.

Girsy had no choice but swim to reach the other bank. But the current in the river was fast and it pulled her down to the falls. There she found herself in calmer waters, so she swam to the other side of the woods. But she had lost all sense of where her family was.

Girsy used her map and compass to locate the point where her family was, and easily reached that point. But to her utter dismay, she did not find her family there. To make matters worse, it began to rain. Girsy found herself a kind of shelter to keep herself dry. She believed that her family would have left the camp looking for her.

After a while, the rain stopped, and her family came back. She could hear her father shouting, “Girsy, where are you?” She showed up from her hut shelter and they reunited with each other.

Girsy was very happy to find her family finally and to get back home with them. At home her mother made hot chocolate and cupcakes, and also many delicious dishes, celebrating their daughter being back with them.

Mother said, "We will be going on another trip next vacation. This must not stop us."

Girsy asked mother, “Where will we be going?"

Mum answered, "To Green Land". Girsy was very happy, and her Dad promised her a vacation without any risks.

"Greenland (about 80% ice covered) is the world's largest island. Weather is perfect for Ice skating then," thought Girsy, as she was reading about Greenland.

Girsy and her parents packed their bags and made all the arrangements for travelling. They finally arrived at Greenland after a long trip by plane. They settled down in the hotel. “Yeh! no camping this time,” thought Girsy happily. Soon Girsy put on a heavy coat and got out of the hotel to enjoy the white snow.

The family thought that no snow storms would blow, for they had checked the weather map earlier. So they left Girsy outside the hotel to play.

However, while she was playing, the sky changed its color and some noises came from far away. Girsy did not bother about this, and continued her play. Running here and there, and then getting back, throwing snow, collecting branches: It was all fun.

Suddenly, the weather changed, the wind blew and pushed her strongly.

From far away, mum's voice came, calling her "Girsy, Girsy...” Mother woke her up. "It was a bad dream. It’s ok now. Be sure we will enjoy our next vacation".