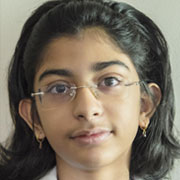 “The Serendipitous Cornfields” by Michelle Saji Antony, is the Highly Commended story in the senior category of the first biannual Short Story Contest 2016.

“In the middle of the corn-field meadow sat a little girl, about 10, in a blue dress. Her lips were plump and red, and she had hair the colour of butter drizzled over toffee. Her arms were soft and she had the most angelic face you would ever see. Day and night she sat there, sitting in the corn-field, staring at her ragged teddy-bear, contemplating what she had just seen. The people who passed her by paid no notice to her. But, even though her unlikely presence in the world seems ethereal and almost non-existent, there is a great story behind the hyacinth pools of her eyes.

It started one bright April day, when the girl was frolicking in the garden of her family’s French chateau. Lolloping around, chucking her beloved teddy up and down. The chateau was right next to a corn-field, where nobody stepped into ostensibly because of “aliens”, but when the girl turned around and looked at the corn-field, she felt a magnetic pull towards it.

Slowly she tottered over, jumped over the small wooden gate, and started hobbling into the corn-field. A few steps and she collapsed, able to stand no more. Pressing her hands onto the dirt, she stood up and stared at the mass of corn around her. She knew she was lost, and tears streaked down her soft face. But that’s when she found out that she was in a clearing in the corn-field. She turned around and saw a screaming-blue vortex in front of her. A scream, and she toppled over again on the ground, her dress stained with dirt, and her porcelain skin blemished with big, ugly red scars.

She stared at the vortex. It bubbled for a moment, and then its face swirled and stopped, revealing a French town within the depths of it. She gazed at it, and soon saw an adolescent girl walking. She too wore a blue dress, almost identical to the one that the little girl was wearing. Her hair was the same colour as the little girl’s, but it was longer and streaked with pink. The teenager held a phone in her hand, her face so close to the screen that one might think her spine would snap. She held a Marlboro in one hand, and the tote bag slung over her milky shoulders held a suspicious green looking bottle. The whites of her eyes were red.

The vortex showed her journey through the town, finally reaching her apartment. The girl swung the door open, locked it, and pulled out a white packet. She cut it open and sniffed it, emitting a sigh of pleasure. The young girl looked at this in displeasure. “Who is this girl?” she thought. As she walked upstairs, the little girl saw a birthmark on her leg, just above the blue stiletto the girl was wearing. She looked down at her own birthmark, also on her ankle. The vortex bubbled into non-existence. The little girl’s eyes widened in shock. “That was me!” She thought. “ I am that horrible person!”

But when she looked up, she saw the vortex bloom into existence again. This time, the depths of the vortex held a different scene. In it, she was about 20, and she was lying in a hospital bed, surgeons all around her. Her head was bald! The little girl saw the birthmark on the foot that was poking out of the patient’s blankets. She sank into the dirt, as the vortex bubbled again, and showed her a tombstone. She saw her mother, kneeling down in front of it, laying a red rose on top of the tomb. The vortex disappeared. She buried her face into her arms, tears flying faster than a metro.

Her dreams had been to be a doctor. She had wanted to travel the world, healing people. She had dreamt of the beautiful life that she would live, where families of sick patients would thank her for saving their loved ones. But apparently, it was not to be. Why would she want to live? She won’t achieve her dream anyway. Her life would only come to an abrupt dead end before she could accomplish anything.

The little girl stood up. She dusted off her dress. She had the chance to change her life.”

The lady closed the book. “And that, my dears, is how our great Dr. Anna McPherry became the revolutionary doctor she is today!” the teenagers sitting around the fireplace listening to Mrs. Fogarthy shook their head. “What a horrible baby’s story you’ve got there.” Fogarthy smiled. “Baby story indeed,” she said, as she looked at the picture on the mantle which held a photo of two sisters, herself and the girl with a birthmark on her ankle.