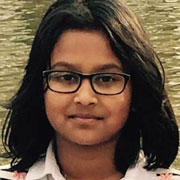 “The Path” by Nahiyan Raidah, is the First Prize winning story in the junior category of the first biannual Short Story Contest 2016.

No one had any inkling what would happen that night.

The wind screeched along with the leaves till they were thrown onto the autumn ground, damp and stagnant with the odour of decomposing. As the ravens circled, their cries reverberated through the forest. A shadowy figure snaked amongst the trees, covered by their long silhouettes, looking as if they were fingers aching to touch.

The rain of the night disappeared, and daylight came to reclaim its throne, yet the forest remained the slave of darkness where no light permeated its cluster of twisted trees.

The driver bade them a hurried farewell as he left the family at the mouth of the forest. He whispered, “Remember, never stray from the path. NEVER. Always stay on the path. Remember.”

No birds chirped, no footsteps sounded and only an eerie silence met them.

Jacob hated this ‘holiday’, so soon after the demise of his beloved father. He had not got any closure, and was inconsolable. His father’s body, he believed, had not come to rest in peace.… Richard Robinson’s swift entry and acceptance by Jacob’s mother had taken him by surprise. So soon after the death of her husband, her new love had entered the household as Jacob’s ‘guardian’. He didn't deserve the title of a ‘father’.

As they walked, the wind stopped moving, as if fearful to go any further. All became motionless. The forest’s silence grew louder till the only sound you could hear was the footsteps of the family, in discordant harmony, breaking the silence with every step.

Jacob trundled behind as Richard and his mother walked ahead, engaged in hushed, urgent, conversation to which Jacob became oblivious.

Something caught his eye. “Hey, mum, did you see that?” he questioned.

Something caught Jacob’s eye again, a dark figure slithering amongst the trees. He left the beaten track to inspect what it was. The words ‘Never stray from the path.Remember. NEVER. NEVER. NEVER’ pounded his head, shouted at him, yet he hauled his feet off the path, ‘It’s just there, then I’ll get back’ he thought to calm himself.

‘Never’.
He felt a cool air blow past him.
‘Stray’.
With sudden heavy legs, he turned around to see where his mother and Richard were.
‘From’.
He saw.
‘The’.
Only the trees that encased him within the darkening forest.
‘Path’.

A branch snapped and Jacob shivered. As his senses came back to life, he rushed to hide behind one of the trees to make sure that whoever or whatever there was in the distance, couldn’t see him.

Jacob was stranded in the open, and as he ran, the unevenness of the floor slowed him down. His body shrieked with pain when the jagged rocks on the floor sliced through his sole. The wind roared as it flung him forwards and his foot became caught in the snarling roots of the forest floor.

Jacob turned to see what stood behind him only a few hundred yards away, and there he saw a silhouetted shape facing him. Silently, the shadow glided towards him and with every passing second, Jacob hoped that it was his mother. When only a few yards away, Jacob tried to focus on the figure. As he did so, a single drop of sweat slowly made its way across Jacob’s skin, moving as slow as a snake to its prey, until it reached the bottom of his quivering chin and hurtled towards his t-shirt. You could see the droplet for a second, and then as if it was consumed, it sunk in the t-shirt.

Staring back, a pair of lifeless eyes of hurt, anguish, love… Dressed in a black fog, only his hands could be seen. Of his left hand, the long, bony fingers reached out to the boy; the other grasped a knife, with blood trailing down the silver blade. Behind him, Jacob could just see two bodies… Both looking at him, and through their dead eyes, Jacob’s parents had found the child they were looking for.

Remember, never stray from the path...