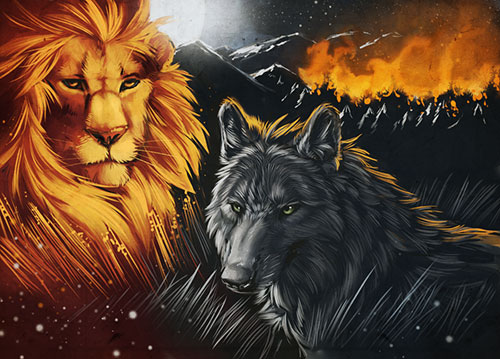 "The Jungle World” is one of the outstanding stories of the first biannual Short Story Contest 2016 written by Namita Vinod, Kochi, India.

In Gujarat, there was a jungle named Gir. In this jungle, there lived lots of animals and birds. They were all living happily playing, chirping and enjoying themselves, with their parents and with their friends. They had a feeling that they were living in Mother Earth and touching Mother Earth. They would tell everyone that they were not living in a jungle but in the world of unity, happiness and peace.

One day, a wolf came to the jungle and went to the lion, the king of the forest. "What is your problem?" The lion asked.

"My lord, I am from the nearby jungle Khora. The king of my jungle has sent me here to destroy your fun and happiness. But seeing the atmosphere here I can’t. Your majesty, you tell me what I should do now?" The wolf enquired.

"Don’t worry", replied the lion. "After two or three days, you go back to your jungle and tell your king that you have destroyed our fun. If anyone from Khora visits us we will act as if we fight and blame each other. Thus they will believe your words.” the lion advised.

"Thank you your majesty", the wolf replied. The king ordered his ministers to treat the wolf as their guest and attend to all his needs.

After three days, the wolf went back to his jungle and told his king that he had succeeded in destroying the fun and happiness of Gir. The king believed that and was happy. But the wolf had not realized that an evil tiger of Khora was closely watching his actions in Gir. Now he set to destroy the peace and happiness of Gir. Without anyone’s knowledge he killed one animal each day. The animals of Gir became frantic. They realized that they were losing their friends and family every day and could not find out the reason for the deaths.

One day the wolf overheard the tiger telling his friend that he was killing animals in the other jungle and destroying its peace without anyone’s knowledge. The wolf felt sad hearing this and he immediately informed the lion king of Gir about the tiger’s evil deeds. Soon the entire jungle came to know of this. They were burning with rage and wanted to destroy the tiger.

So, that night the rabbit went alone to become a prey of the tiger. His jungle friends the elephant, the lion, the tiger, the crow etc were all hiding in the dark. When the evil tiger began to pounce on the rabbit, he was attacked by the lion, the good tiger, the elephant and even pierced by the crow. He was killed and the whole jungle danced in joy. The king thanked the wolf who had been kind enough to inform them of the danger. The wolf replied, “Your majesty I was moved by the love, happiness and unity in your jungle. It is really a wonderful place and blessed by Mother Earth. So please let me be a part of this jungle too.” All the animals welcomed him and thus the wolf too became a part of the beautiful jungle Gir.