Story Contest 2016 #1 - Outstanding Stories » The Blessings of the River 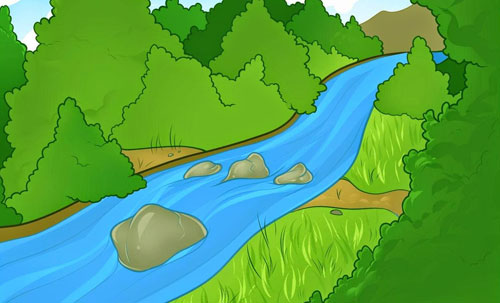 “The Blessings of the River” is one of the outstanding stories of the first biannual Short Story Contest 2016 written by Unni Krishnan Hari Kumar, Bahrain.

The Blessings of the River

Once there lived a boy named Krishna on the banks of the river Kaveri. He was the eldest among five children. Krishna’s father was a very lovable and hardworking man. Even though he worked hard, his earnings were not enough to meet both ends.

At nights, with only a quarter-filled stomach, the children could not sleep. To make them sleep Krishna’s father used to play the flute and tell them stories about the mercy of the river Kaveri. Through his stories Krishna started loving the river very much and he thought of the river as a goddess.

Once, on a rainy day, Krishna’s father fell ill. Seeing his siblings crying for food, Krishna went to the market and a merchant gave him the work of loading and unloading heavy sacks. With a starving stomach, he worked hard till the evening. From the wages he got, he bought food for his family and medicines for his father.

On his way, when he reached near the river, he heard somebody crying from the river. He ran towards the river and saw a man crying for help – he was drowning. Krishna put the things on the bank of the river and jumped into the river. It was very dark and the river current was rough. But he swam towards the man and saved him. The man was very happy and thanked him. He asked about Krishna’s whereabouts and went away.

Suddenly Krishna thought of his home and ran to take the food he had kept on the bank. To his shock, he found that the river had washed away all the things. He cried loudly and asked the river, “How can I go home without the food? You ate all the food for my family and made us hungry, but even then I thank you for helping me to save a man.”

He sat there crying for many hours. He even forgot about the time. It was late night. He slowly walked towards his house. When he reached near his house he heard the music of his father’s flute. He ran to the house. He could not believe his eyes. The man whom he had saved was sitting there.

Krishna looked at his father. Then his father told him what had happened. That man was a noble and rich merchant of the nearby village. On his way to the village he had to cross the river Kaveri. While crossing, he had accidentally fallen down into the water. He was very impressed with Krishna’s courage and helping mentality. So he had come to Krishna’s house with food for the family and was waiting to see Krishna to give him a good job in his shop.

On hearing this, tears came out of Krishna’s eyes. He ran towards the river and said “Oh River goddess! You took our one day’s food with one hand and in return gave us food for the whole life with the other.” He thanked the river and returned home happily.