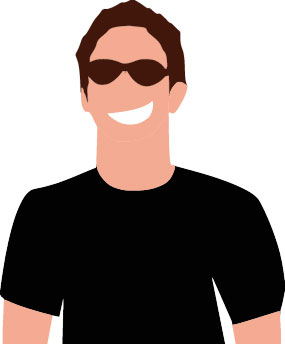 “Operation: KILL” is one of the outstanding stories of the first biannual Short Story Contest 2016 written by Rushil Boorgula, Hyderabad, India.

He moved swiftly as he entered the hotel lobby. He walked with the pace only maybe an athlete would have: more of a stride covering a foot every time he took a step.

He had close-cropped hair, jet black; he had the body of an athlete, a good build for his size; he had a rigid 6’2” frame.

He had light skin with eyes not too wide or too close. He had Givenchy sunglasses, simple yet elegant.

He seemed almost indiscernible among the few people in the hotel lobby, which was what he was trained to be, to be unnoticed. He had chosen a hotel of his convenience, not too cheap, not too expensive: one at a moderate price. He knew that the expensive hotels such as the Ritz-Carlton and other hotels in its class had trained their staff to remember the faces of their guests.

He walked up to the reception and asked, “Room for Bogdan Uvarov, please?” He spoke with no trace of an accent: It was quite clear that he was a professional in what he was doing.

“Certainly sir, right this way,” the receptionist gestured towards the lift and signaled to the bellboy to take the suitcase.

“Thank you,” he replied and walked towards the lift. He took off his shades.

His name was Boris Kurekunov and he was an international assassin. He was working for the organization SCORTIA, which stood for Sabotage, Corruption, Terrorism, Interrogation and Assassination.

He entered his room on the first floor. It was convenient in case he had a situation in which he had to jump out the window. Though that didn’t happen very often, it was good to be wary.

Boris walked to the mattress and lifted it, and he saw a brand-new gun. It had been placed on order, of course. It was a personal favourite of his, a Glock G17, the grip specially crafted just for him.

Boris spent no more time. He continued with his mission, which was to assassinate a business man by the name of Richard Banks, who had previous dealings with the SCORTIA but was causing too many legal problems.

Equipped with his gun Boris went down and got into his car, a Mercedes S-class. Powerful, intimidating yet elegant, it was just the car for him. He got into the car, twisted the key and floored the accelerator. The journey was a short one and Boris had twenty four hours to eliminate his target, but he’d do it faster. He pulled up near the hotel and scanned the building for escape routes in case anything happened. His eyes flickered and went over the building a few times. He looked at his watch: It was 5 minutes past 7. It was an ideal time as it was dark. Boris walked towards the reception.

“Yes sir, we’ve been expecting you,” the receptionist replied. The real Mike Mirdoff had a bullet in his skull and was resting in peace in the trunk of the Merc, still elegant. Boris walked to the conveniently placed room on the first floor. He saw two guards outside the door armed with AK-47s and an AP pistol lying dead in the holster bursting with energy to come alive. Boris decided he would fulfill its wish. He smiled at the guards.

“Oye, you get off the grounds before I smash your ‘ead to pieces mate,” one guard said. He had a Scottish accent. The smell of tobacco lingered in the air. Boris said nothing. He simply raised his gun and fired in one simple movement. His bullet went square into the man’s skull and a flower of blood erupted from his head. The Scottish man fumbled for his gun, Boris jabbed him in the stomach exposing the front, and he grabbed the AP pistol from the holster, spun the gun on his palm and shot him in the head. He continued into the room and found the man sleeping amidst all the noise. Boris smiled and threw his shades on the bed.

Later, the police found Richard Banks dead, the cause being cyanide gas. All they found was a pair of sunglasses with a small tube inside, a tube that was programmed to eject gas at a certain time.