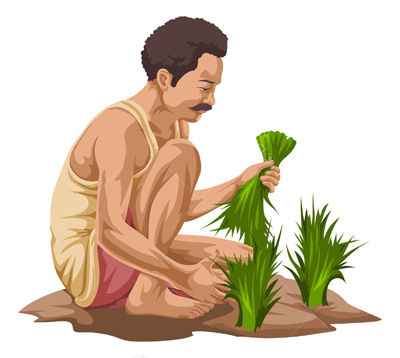 “Karma” is one of the outstanding stories of the first biannual Short Story Contest 2016 written by Amirtha Varshini, Tamilnadu, India.

In a remote village lived a farmer who had five children and a crippled wife. He had to shoulder all the burdens of his family. He used to cultivate organic and chemical-free crops. The poor farmer had borrowed money from many, had sown the seeds and was waiting for the rain.

The farmer went into the field. The soil looked dry. He looked at the blue sky with hope but there was no sign of rain. He closed his eyes and prayed: All his problems raced to his mind. When he opened his eyes, tears stormed out.

The next day, the farmer decided to irrigate the field artificially. He worked day and night, but could only irrigate half of the field. He had to be satisfied with that.

Finally the crops were ready to be harvested. He harvested, threshed, packed the rice and stacked it in his store room. He went to bed and had a peaceful sleep after many years.

He visited the store room after some days. He was shocked. “Oh! My God,” his voice shook with fear. “What am I going to do now?” Rats had damaged the rice sacks. The farmer didn’t know what to do. He immediately took the undamaged sacks and rushed to the trader.

The trader was a cheater, boaster and a wicked man who would buy goods from the poor farmers for a cheap price and sell it at double the price. As he was the only trader in that village, the farmer had no other way other than selling it to him. The trader offered an unfair price for the farmer's goods. The farmer was compelled to take it because of his dire situation. Sadly, he took the money, secured it under his turban and hurried home.

While he was travelling, he felt a change in the money bags' weight, but didn’t want to check them while travelling because he was scared of thieves. When he reached home, he immediately emptied the bags. "M..My..go..o..dness", he was flabbergasted. He couldn't believe what had happened: the bag contained diamonds … diamonds worth crores.

With tears blurring his vision, the farmer locked the diamonds in a box. He sold some of the diamonds, settled his debts and gave some money to charity.

In the meanwhile, something strange was happening to the trader. Whip marks began to appear on his body. It looked as though something supernatural, like an evil spirit, was whipping him. The trader was traumatized and called out in horror, “help me, help me...”

Some of the villagers suggested calling a spirit chaser. A famous spirit-chaser was called and many people gathered in the house. The spirit chaser placed the ouija board in front of the possessed trader and started the rituals. Suddenly, a bright light appeared, accelerating the heartbeats of the spectators.

The big ball of light thundered, "I possess this wicked man, who cheated poor farmers. I'm nothing but a rice grain, which gained supernatural power, when the poor farmer's pearl-like tears, charged with pains and struggles, fell on me. It's me who transformed the farmer's money into diamonds.”

All the wealth of the trader was spent on his treatment. The family became paupers, and dependent on the farmer whom they had once cheated.