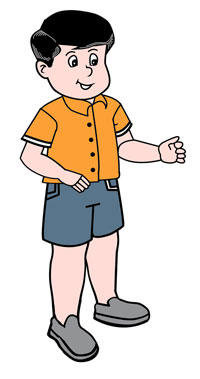 Jeremy was a beautiful little child who lived in Dallas. He had just turned five years old. He lived in a big house with a beautiful family. Jeremy lived with his mother and father who got married ten years ago, his older brother Arthur, who liked to play with him, and his little sister Mariah, who was only two years old.

Jeremy was having breakfast one day, when he saw his brother brushing his teeth and then running to wait for his mother to give him a kiss. After mother kissed him good-bye, she said, “be a good kid”.

Jeremy was confused about what was going on. So he finished his meal and asked his mom, “Why was my brother acting like that?” His mother said, “He is just growing up, nothing to be worried about.”

So these new words were on Jeremy´s head. “What a wonderful thing! Growing up sounds great!”

Suddenly he heard his mother´s call, “Come on little guy, you need to go to school.

Jeremy´s school day passed by quickly, and it was time to go home again.

When Jeremy arrived home, he was very hungry. He was waiting for his mom to give him a delicious hot meal. He was surprised when he saw his mother put his meal on the table. “What´s this?” He asked.

“You need broccoli and carrots to grow strong and smart,” said his mother.

Jeremy was very angry because his mom had served him vegetables. He had never liked vegetables in his life…and his mother knew that.

“Why do I have to eat this? I don´t want any vegetables mom,” said Jeremy.

His dad had just entered the kitchen when Jeremy was saying to his mother that he did not want to eat vegetables. Jeremy´s dad said, “Young boy, if you don´t want them, then just leave. But, if you don´t eat them, you will be punished, so eat them.”

Later he locked himself in his room.

It was almost night time and his mom came to see him.

She said, “Your aunts are coming, so I want you to be ready soon.” (His aunts were his mother´s sisters)

Jeremy started to get ready the moment his mom left.

“I don´t like my aunts. They always give me a headache,” said Jeremy.

Jeremy went downstairs, and his aunts were there. With their pointed and sharp nails, ready to be placed on his little face.

Jeremy was worried about what would happen this time, because the last visit didn´t turn out fine. They had all started to pinch his little nose till it ended up like a big berry from a guilder-rose.

It happened just like Jeremy had predicted. His aunts started to pinch his cheeks this time, saying: “How are you Jeremy? You are so cute!!” Jeremy smiled, but deep inside he was feeling a bunch of needles going into his cheeks, until finally, one of his aunts gave him the biggest squish.

I don´t want to be pinched by my aunts anymore.”

His face changed when he saw his grandfather entering the living room with his mother. He had always loved it when his grandpa came over to visit the family, because grandpa liked to share stories about his job (he worked in a museum). Jeremy also liked something very unique about his grandpa. It was his long, long, long beard that hung from his chin.

He ran to hug his grandpa, escaping from his aunts (He knew his aunts loved him: He just didn´t like their way of showing it).

When his grandpa finished telling one his stories that in fact he had already told about ten times previously, Jeremy asked him, “Why is your beard so long, grandpa?”

His grandpa said, “Well, I have it because I’m very old and I have never shaved it in my life. But, because you are my grandson, when you grow up Jeremy… you´ll have the longest beard among your friends.”

When Jeremy heard these words, he got angry again. He ran to his room, and screamed all over again:

I don´t want to be a child anymore.

I don´t want to be pinched by my aunts anymore.

I want to have a long beard, I don´t want to be a child anymore!”

Jeremy´s mother heard everything behind the door.

So she decided to enter, and know what was going on.

When she entered, she asked Jeremy, “What´s going on sweetie? Is everything okay?”

Jeremy said, “No mom, everything is wrong.

I want to grow up, but it is taking me so long!”

His mom said, “But why do you want to grow up so fast?

If that should happen, you will not be my little child anymore.”