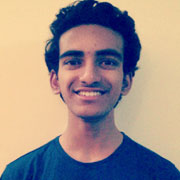 “From Peasant To Puissant” by Adarsh Raj Bhatt, is the Third Prize winning story in the senior category of the first biannual Short Story Contest 2016.

From Peasant To Puissant

The sun hung high and orange in the sky over the western horizon when a woman behind me started screaming her lungs out.

“Hey you, thief, come back here! Somebody catch that rascal in the brown jersey.”

My name is Manjhi Patel. I’m a middle-aged peasant from Bihar who used to live as a content and hardworking farmer in the village of Rewali. I had a kind-hearted wife and two beautiful daughters. All happiness and light bade my life an eternal farewell when a band of armed dacoits emerged from the woods one night, ransacked the village, shot dead as many people as they could and set fire to my Rewali. I was one of the extremely few people who managed to make it out of the malevolent flames and mournful air.

My wife and daughters were not.

Often, the brutally ironic and crushing conditions of my life make me wonder if there really is a God residing beyond the all-embracing dome of the skies, looking down lovingly and generously at His kingdom below, as my father had explained to me once. On many an evening, when the sun sank and took all the light with it, I trudged back home from work wondering why He chose to let me live a life so riddled with emotional and financial holes. Every day for the past two years, as I forced down two cold meals in the searing silent solitude of my crude mud-and-brick shack, it was all I could do not to break down right then; my faith in Him came dangerously close to breaking.

“You, turn around and don’t you dare try and escape. You two, hold him.”

Snapping back into the marketplace that lies on the way back home, I spun around. And what! The woman screaming at me was none other than the wife of the engineer whose car I washed every day.

“Madam…” I bowed my head in respect and shame, and tried to join my hands in namaste before I noticed that I couldn’t; there were two shopkeepers holding me firmly in place. “What…” I jerked my head back up again. “Why, why are you calling me a ‘thief’, Madam?”

In response, Madam gestured to someone and I felt the wind knocked out of me as a blow landed heavily on my skinny stomach. I doubled over and retched. Madam was glaring accusingly at me. A circle of people had gathered around us.

She jabbed a finger at me. “Three of my diamond rings and a gold necklace! Just vanished into thin air, did they?”

“Two years you’ve worked for my husband obediently and now this black act,” she said. “So if you give me anything but the truth now, I promise that I’ll have you flogged before you go to prison. Did you steal my jewellery? The truth now, Manjhi!” As she finished, perfect silence fell upon the marketplace. Everybody leaned in to watch my face closely for a lie.

And then my eyes unexpectedly landed upon the Man. I had never seen him before and my fleetingly straying gaze never intended to light upon his face- but I knew. I knew what he had done. I could tell from how he’d agitatedly tried to snatch his stare from my face in the instant our eyes met, from how his tongue ran briskly along his dry lips and from how beads of perspiration suddenly formed on his forehead.

I knew his sin. I knew he was the robber that I was being mistaken for.

Why he was in the crowd around me was to ensure that I was imprisoned so that the scene in the marketplace safely closed the book on his theft. Despite Madam asking me for the truth, the word of a car washer mattered nought. When I would insist that I’ve not committed the robbery, he was here to step forward and incite the mob to carry me to the police station.

However, now as I prolonged our eye-contact and in the vast silence, my gaze bored into the darkness of his heart, we both sensed his plan backfiring on him. He knew that I was about to point my finger at him and ask Madam that his house be checked for the jewellery or for the large amount of cash he would have traded the precious ornaments for. He could not risk running or backing away from the crowd, either, because nothing else would arouse more suspicion in his direction. In a great twist of irony and chance, the mastermind of the robbery was trapped in his own web.

Thoughts suddenly gripped my mind. If I expose the jewellery in his house, would that accomplish anything other than removing the manacles off me and tightening them around him? If I don’t expose him, it will strip me of my honour and mean spending my entire life in jail for a crime I never committed… but in the grand scheme of things, what good is my honour if it obstructs a sinner’s heart and expiation and transformation? For certainly, this man who looks on me with a hopeless, desperate plea in his eyes, can rise to know goodwill and reverence for other men... if only I can show him that goodwill and reverence exist.

At this moment, a glorious inspiration made my heart sigh in triumph- I had finally deciphered Him.

God is not somewhere beyond the skies at all… He is a soul composed of love and happiness within each one of us, within every living creature He created. We need only imbibe this soul inside us in order to worship Him...

And thus, feeling satisfied and unburdened in a long, long time, I grinned fiercely at the Man and spoke the words of salvation, of a new start.

“Madam...I stole your jewellery. May God forgive me.”