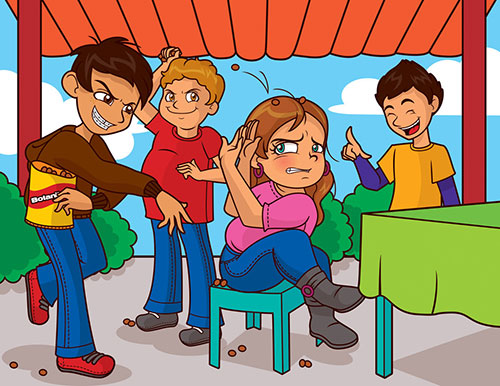 "Fight For A Change” is one of the outstanding stories of the first biannual Short Story Contest 2016 written by Malaika Mohana Hossain, Al Ain, UAE.

Fight For A Change

“Darling, I just got a call from your principal. She says you’ve been troubling the students and the teachers again,” mother said, disappointedly.

Monica was being blamed for something she did not do. Again. She had become used to it, and thought that it was useless to try to prove her innocence.

“Sorry mother. I will make sure nothing happens again,” Monica said, keeping her head down.

“You have been saying this for the 20th time,” mother scolded.

“Fine, just go back to your room.”

Monica returned to her room.

The next day, Monica woke up got ready for school. She was ready for school but not to confront the bullies. She tried to be as strong as possible, but sometimes the tough exterior that she was trying to build around her broke down.

She entered the school and as expected, her books were snatched from her hands. The bullies laughed at her face. Monica accidentally let in a look of disapproval on her face: It was not meant to be seen.

“Did you do THAT face to me?” Sam shouted.

Sam pushed her and pinned her to the wall, his breath fanning her face dangerously. She turned her face and closed her eyes as tightly as possible.

“This will be the first and the last time you show me THAT face,” he warned.

Sam pulled away from her, making her fall down. The others in the gang laughed at her.

“Here,” a girl appeared from nowhere, and helped her get up.

“Thanks,” she muttered, as she got up.

“I assume you are scholarship student?” the girl asked.

“No wonder they are treating you this way,” the girl said thoughtfully.

“I am Jenny by the way,” the girl introduced herself as she extended her hand.

“Monica here. I hope you are not a scholarship student as well,” Monica joked,

“You are the first person to actually talk to me,” Monica said,

Jenny just smiled at her. Jenny reminded Monica of her elder sister, who had passed away in a car accident. She was filled with positive energy and happiness.

“Why are you crying?” Jenny asked curiously.

Monica quickly wiped her tears and shook her head.

“It’s okay. You can trust me,” Jenny said, as she placed her hand on Monica’s shoulder.

Days passed by and Monica got bullied at school every single day. She was too scared to confront the gang. But Monica’s mother came to know that she was bunking school and scolded her badly. So she was forced to go to school the next day.

As she entered the school, a girl approached Monica. The girl gave Monica a piece of paper and said, “Jenny asked me to give this to you.”

“Thanks,” Monica muttered. She read what was written on the paper.

When she looked up from the letter, her eyes caught a picture of Jenny on the board, with the ones who had left the school.

When she turned, Sam appeared in front of her, and started pushing her. But she pushed him back in anger and he stumbled back.

“What do you think you are doing?” he shouted at her.

“I am not letting you continue your disgusting behaviour,” Monica spoke up.

It got crowded fast, and Sam’s face flushed in embarrassment.

Suddenly someone spoke up.

“I speak up for myself and my sister,” a student came forward. He was also a scholarship student, who had been badly bullied.

“I speak up for my brother and my sister,” said another student loudly.

Then the chorus of ‘I speak up’ started. Monica looked at Sam and his gang. They were standing there, stunned and isolated.

After that incident, Sam and his gang were suspended from the school for a long time. Monica and other scholarship students could study without any problem. Just because of the inspiration from one student – Jenny.