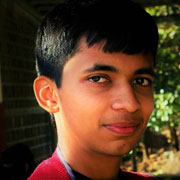 “Cornflake” by Ujwal Kartik Mantha, is the Highly Commended story in the senior category of the first biannual Short Story Contest 2016.

The nature of my existence was very different just a few months ago. I lived a life of carefree growth and whiled away my time nonchalantly, a devotee to the wind, sun and moon. I was an elegant piece of creation with my smooth and slender structure and elegant complexion. I looked forward to a consistent and uneventful life till the days of my shriveled yet graceful return to the earth. This dream, of an orderly and peaceful future, soon dissipated like the flimsy smoke it was.

Chaos struck quite suddenly and quite uninvited. Groaning contraptions along with many giant and monstrous creatures stormed my land of residence where I lived with many of my brethren.

One of the giant contraptions bore down on us and we were helpless as it mowed us down by the hundreds. I was seized from my home and bundled into a large rugged sack which I shared with many more of the unfortunate victims of this abduction.

My memories after this are tinged with madness and are thus incoherent. All I can say is that I went to a land of pure torture where I suffered pain so incredible that it warped my fragile mind. A cruel blessing, whatever they did to me in there, it turned me into a lifeless husk. My skin, once supple, was rough and rugged, and I was only a slice of my former self. We were directed into a cruel and dark cage and made to huddle, each breathing the other’s breath. And it was in this infernal hell that we spent what seemed like an eon.

What was happening to me? Pain is a thing in itself but with no discernible reason it feels ever so acute. Sleep abandoned me and I was forced, another long addition to this accursed life’s cruelty, to go through my ordeal in full consciousness.

Death was a frequent visitor to the recesses of my anguished mind. I had been told by my predecessors of the mysterious concept of oblivion. Yet their description of it was far more peaceful. They described it as a transaction where I went from the hands of the Good ones above to the arms of the Great ones below. A path to rest and peace, that was given to everyone from the lowliest parasite to the noblest tree. Their tales of it were always pleasant to hear, nothing like my present condition, but somehow through some mad hope I knew that death would come for me. There is justice in the world, there is a balance and Death would be mine.

The crowd rustled suddenly and I heard murmurs that the cage doors had been opened. This news did not create or reach a hopeful animal. I was dead to all hope except that of Death itself which I awaited eagerly. I could see trickles of light fill the nooks and crannies of the bodies in the box and then the whole world seemed to tilt and we all began to fall out. Time seemed to slow down to conveniently allow me to see the landing I would receive. We seemed to be falling into a sort of bay with water as white and pale as bleached bone. We all hit the pale water and the air was hollow with the silent screams of me and my brethren and the rustling sound made by the splashes from our bodies hitting the water.

I floundered about in the eerily sweet bleached water. I gasped for air as my emaciated body floated up quite easily, displacing many other people who were left to drown under. The water seeped through my skin and began to consume me almost corrosively and my rigid hard body became soft and supple. It was a strange feeling and I let it consume me as it seemed to lessen the pain that had been my parasite throughout my time in the cage.

I floated for a while when I saw a large, gleaming curved device descend into the water around me. It rose and took me along with many others and some of the water with it. I turned and saw the giant, horrendous face of a Giant. His mouth yawned open and the device I was caught in began to descend ever so slowly into that giant cavern of meat.

There were no screams as they saw the gnashing teeth or when they saw the writhing tongue. And no one felt any terror at seeing the gaping black hole of the throat, certain oblivion.

I suppose that they, like me, had realized that this was their salvation, an uncertain one, but the uncertainty of salvation is a better bargain than the certainty of pain. We all looked on with a peace that can only come to the face that yearns for the balance that only death can provide.

And as we fell into the gaping maw and slipped into its oblivion, I closed my eyes and fell into a restful sleep.

“Those cornflakes tasted quite good Ma” casually remarked a young boy getting ready to go to another day of school. The mother smiled, “They were a new flavor. I thought you’d like it. Now finish them faster or you’ll be late for the bus!”