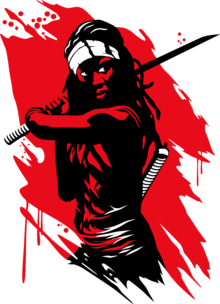 "Bloodstained” is one of the outstanding stories of the first biannual Short Story Contest 2016 written by Shreya Shewde, Dubai, U.A.E.

The stench of rotting flesh curdled the air surrounding the forest.

I glanced back at the ditch. Corpses were piled upon one another, limbs twisted at odd angles, maggots and flies clustering over deep wounds as they spoke through cracked lips.

I shook my head and tugged the reins. My horse trotted forward, pausing at the fringes of the forest. Lighting my torch, I waited.

The moon hid beyond a thin curtain of clouds, draping the world in shadow. Dead leaves rustled. Frowning, the forest people emerged. The flame of their torches accentuated their gaunt cheeks.

I descended the horse and placed the boy in front of them. A woman, her features twisted in anguish, ran towards the dead child and fell to her knees, cradling his bruised body on her lap. Dry blood flaked where claws had raked through his skin. The woman swept aside his hair, revealing a pair of blunt nubs. Horns- broken ones. His limbs were bone, the soles of his feet punctured with holes where he was subjected to frequent torture. Faint half –moons curved beside the boy’s mouth, waiting for a smile that would never come.

“I offer my deepest condolences.” I whispered.

I imagined her peering out the window of her desolate house at the tiny speck of city in the distance, tears spilling down the corners of her eyes as she ached for her son.

“He is at court. I shall bring him to you soon.”

A tendril of her long hair curled around my throat, tightening, choking. I blinked, felt my neck. Nothing.

I approached the Elder, handing him the package of food I stole. His fists clenched, veins prominent against thin skin.

“The king plans on digging a new ditch.” I said, “The forest will turn into a grave- unless we stop them.”

“Why is he doing this?” He asked through gritted teeth.

“We preserve everything that’s different. He kills it.”

As I turned to leave he grasped my gauntlet, the wind churning in his silver hair. “We have waited long enough and this,” He pointed towards the dead child, “this is war.”

Word spread faster than the fragrance of ripe berries.

Through the short hours of night we gathered, mobilized and provoked. The forest people sharpened their arrows, knives, horns and talons, and rode atop their horses. And charged.

We moved as one, torching the homes of the city people, leaving in our wake screams and charred bodies. That night we charged them all guilty. The trees that looked perpetually blinded by the splendor of the city then seemed sturdy as soldiers, their branches forming an impenetrable wall around the forest.

Fueled by the crash of weapons and cries of vengeance I ripped through the blaze and burst into the palace- the palace that fed off deprivation and desperation, trapping souls in an opulent hell.

Pandemonium ensued. The city people ran like mad dogs. Glass smashed. Ceramics crumbled. Fire crackled, eating clothes and skin. And amidst it all sat the king, cowering on his throne.

The dead boy’s father bellowed and dug his horns into a city guard’s gut. Blood oozed out. A maid’s guttural screams echoed in my mind. I had seen her countless times as she had been dragged into the general’s chambers deep at night, her shimmering eyes dull when she returned. She plunged a crude dagger in the general’s stomach, ripped it out and stabbed again, her feathered cerulean hair dripping.

I turned and my eyes met my target’s. Moving towards the king, I drew my sword. A city guard valiantly blocked my path. My sword slashed across his chest, leaving him behind in a bloody heap.

My heart charged with adrenaline, I spun around to see the king. He threw a hard punch to my jaw.

“You led the forest people here,” he hissed. “Why, knight? Why betray your own kind?” He kicked me in my gut, knocking me off balance. “My kind?” I scoffed, “You made us slaves to your kingdom. We were content, peaceful but you-” I spat blood. I lunged on him, grabbed him by the neck and slammed his cheek to the wall. A tooth rolled down his mouth.

“If your people were peaceful they would never have attacked.” He choked out and smashed his foot onto mine. Pain shot up my leg. My grip on his throat weakened and he spun around. He fished a dagger from his boot and charged towards me but I deflected the blow, shifting sideways.

With a strong twist, I rammed a punch to his temple. The crunch of bone was heard. The dagger flew out his hand.

Crimson dripped down his chin from the tear in his cheek. Delirious, he whispered, “You made them attack.”

I staggered to my feet and tugged off my metal glove. My claws, sharpened to a point, gleamed in the glow of the fire surrounding us. I threw him to the wall and lowered my mouth to his bleeding ear.

“All they needed was some motivation.”

My talons raked across his chest, tendons and strings of pink flesh snapping.

He screamed- just like the boy with the broken horns had. Just like all of them had.

His howls were music to my ears.

Seizing his throat, I smashed his head onto the wall. There was a sickening crack and his limp form dropped to the ground. Spattered blood stained the polished white tiles.

The bruise on my jaw throbbed as blood filled my mouth. Lungs surging, I inhaled. Ash and copper hung thick in the air, chaffing my throat. My vision clouded.

I saw wispy souls drift up the ditch. Their accusations muted the forest people’s victorious cries. Guilt clawed at me from within. I folded into a fetal ball, my claws curling in my hair. Their whispers were loud in my head.

I should have known that they would never be quiet again.