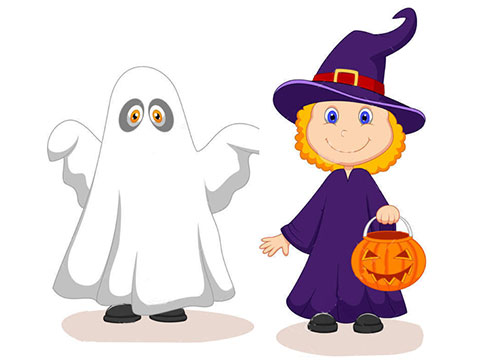 "A Halloween Experience” is one of the outstanding stories of the first biannual Short Story Contest 2016 written by Kishen, Malaysia.

It was Halloween and I dressed up like a witch, wearing a pointy hat and also a long purple jacket. My fat friend, Charlie, dressed up like a spooky ghost. The two of us went trick-or-treating together. At first, we went to one of our school teachers’ house. When we rang the bell, two teenagers came out and gave us some sweets. After that, we went to my Uncle Thomas’ house and he gave us each a packet of marshmallows. We also went to Charlie’s cousin’s house. We were very happy because they gave us lots of candy and chocolates.

When we were going to my grandfather’s, we passed this huge house. Charlie and I decided to go trick-or-treating there because we thought we could get lots of candy. When Charlie rang the bell, I shivered because there was a creepy sound coming from the house. Then, I realized that it was the sound of the bell. When the door opened, Charlie and I went in. We realized that there wasn’t anyone in the house. When we walked towards the door, it suddenly shut. Out of blue, a mirror magically appeared and said, “If you want to get out of this house, you have to do what I say.” We nodded because we were too afraid to do anything else. “The first thing that you should do is find seven spine bones for me. You can get them from the locker in the basement.”

Charlie and I had to kill three zombies to get the key of the locker to find the spine bones. Unfortunately, there were only six spine bones in the locker, so we had to take a spine bone from one of the zombies that we killed earlier. When we gave the bones to the mirror, it said, “Next, you have to bring a bowl of mosquito blood to me in an hour.”

Both of us were paralyzed with fear. How were we going to do this? It took us five minutes to find a bowl, and we wondered how long it will take us to find a bowl of mosquito blood. Without wasting time, we started to collect mosquito blood. It made us kill more than a hundred mosquitoes. I felt quite guilty killing those innocent creatures but I had no choice.

Suddenly, the magic mirror appeared again. We gave her the bowl of mosquito blood. Then, she demanded for five human teeth. Charlie and I almost gave up. Suddenly, I had an idea. I suggested plugging out our own teeth but we weren’t brave enough to do so. As I was looking for some teeth, I saw something weird. As I went closer, I saw a huge human-sized glass container. I felt very suspicious and I wished I could identify it in the dark room. Finally, I recognized the object and it was a coffin. I called Charlie and we saw a man in it. I suspected that he had died quite recently since he still had a lot of flesh in his body. Without hesitation, we plucked out five of his teeth and kept them in a pouch that I brought.

When we were done finding the teeth, we wanted to meet the magic mirror, so we shouted out loud, “Magic mirror, where are you?” The magic mirror appeared and took the teeth. Then, it opened the front door. Do you know what happened after that? Charlie and I quickly ran out of the house and promised to each other not to tell anyone about it, including our parents because they would think that we were day dreaming.