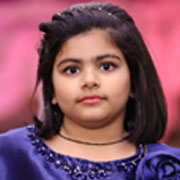 Kashish Kataria is studying in Kothari International School. She likes reading books and stories. She recently completed reading Tom Gates Book. She also likes dancing and acting very much. India’s Best Draamebaaz is one of her favourite programmes. Her favourite subjects are art and craft. She wants to become a Rockstar.

Once upon a time there lived a poor boy in slums of Delhi. His name was Saahas. He was living alone and was very sad. He used to clean cars every morning in nearby society for his daily breads.

One day Saahas asked a boy, “Would you be my friend?”

The boy said,“I have lots of friends. I don’t want to be your friend”.

Saahas asked a girl, “Would you be my little sister?”

The girl said, “I have 2 brothers. I don’t want to be your sister”

Saahas asked a woman, “Madam, would you be my Mother?”

The woman said, “I have kids. I cannot be your mother”

Saahas asked a man, “Sir, would you be my father?”

The man said, “Go away! Don’t bother me”

Saahas felt very sad and alone. He was crying on footpath. An old beggar saw him and asked, “Why are you crying little kid?”

Saahas said, “Baba I am so alone, I have no friends, no parents”.

Baba said, “No kid you are not alone, God is always with you.”

Baba said, “Kid, God is everywhere and is always with you, come with me I will take you to the God”. Baba took Saahas to the nearest temple and said, “Kid, you will meet your friend, mother, father and sister here in this temple.”

Saahas started to come to the temple every evening. Some days, he meets and speaks with gods in the temple as if they are his friends, some days as his mother and father.

One day when he was coming back from temple, a poor kid asked Saahas, “Hi brother! Will you be my friend?”

Saahas said, “What is your name my friend?”

Saahas said, “Saheed, I will be your best friend”

Soon, they both became very good friends. One day they decided to go to the Janamasthmi Mela. Saahas was waiting for Saheed at his room, but he didn’t come. Saahas went to Saheed’s room but found his room locked. He looked for Saheed everywhere in nearby locations but could not find him. Saahas was very worried and sad while he met the old beggar.

Saahas said, “Baba Saheed is missing today, I have searched him everywhere but no luck!”

Baba said, “Saheed has been kidnapped by a beggar group and took him to their beggar training camp near Yamuna river. They are very dangerous, so you must go to police for help.”

Saahas quickly went to the nearest police station and told them everything. With the help of the police Saahas not only saved his friend Saheed but 10 other boys and girls.

The Police said, “Saahas with your courage you saved lives of many kids, we would like to give you lots of money as reward.”

Saahas said, “Sir we don’t want money but we want a family”.

One of the Police Inspector adopted Saahas and Saheed as he has no kids. Both studied very hard and one day both of them became IPS officers.