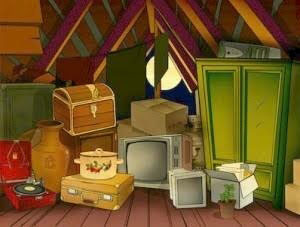 “Up In The Attic” is one of the outstanding stories of the second biannual International Short Story Contest 2017 written by Zaahra, India.

Up In The Attic

One day I was getting bored. I had a holiday and I had nothing special to do. Suddenly, an idea came to my mind and I decided to rummage through the attic in our home. I always fantasized about it and the world it beheld but never mustered up enough courage to explore it as it was dark and dingy. Also, I feared mom’s reaction if and when she found me there.

So today, I was going to take the plunge. As quietly as a church mouse, I crept up the creaky stairs that led me to the secret world. As I opened the heavy metallic door, it groaned loudly, as if complaining either of misuse or maybe because I had disturbed it. Anyways, the attic was in a bad condition. There were cobwebs and dust everywhere. Now, I realised why mom was apprehensive about opening and cleaning it, simply because it would take ages! There was a distinct smell which usually consumes places which have not been used since long. I was in for a disappointment when I tried to switch on the light. I couldn’t turn it on. Now the only source of illumination in this room was the attic window. Though the window was closed and partially obscured with some junk, yet I could see everything as soon as my eyes adjusted.

As I ventured in, I was immediately drawn to a wooden chest which looked exactly like the ones I saw in my story books on treasure hunts. I was super excited just by the look of it. However, my mood quickly turned sour. So many things were piled on it. It would have been an uphill task to just remove all the stuff above it. I was in a dilemma. Should I try taking off all the trash above it? Would it be worth it? What if I hurt myself? What if these things fall and hit the floor with a bang? Everyone in the house including mom, will surely come to know about my whereabouts and intention then! Can I take that risk?

Confused by all these questions, I decided to go ahead. I grabbed a portable ladder from nearby, placed it against the pile of junk on the chest and up I went! I decided to take full advantage of the hurdles in my path and leaned confidently against them. Fortunately, the first one on the top was a rolled-up rug. I yanked it towards my body and threw it down. It fell on the floor with a dull thud. Obviously, no one two floors down, would have heard it. However, a smoke of dust enveloped the room as a consequence. I coughed vehemently. When the dust settled and I could breathe normally, suddenly an idea hit me. Why not use the rug as padding? It was certainly large enough to be spread on the floor and act as a cushion and absorb all the sound when I throw all the remaining boxes piled on my trunk! Wow! Now my brain was working!

Elated I climbed the ladder again. Next was an old suitcase. I recognised it. We used to take it on all our journeys when I was even younger. When, I pulled it towards me, I realised that it was empty. Down it went on the rug! Left behind, was a big bundle. It was huge. It seemed as if my mom has wrapped a whole village in it! As I wrenched it away from the pile, the ladder swayed dangerously. I sent a silent prayer that if I don’t fall; I will never venture here again. God heard me! The ladder miraculously balanced itself. I said a silent thank you to God. I again started working on pulling the gigantic bundle. This time it budged and down it went! Next was a huge pile of newspapers and I carefully dropped them on the floor. Then I climbed down the ladder.

Now I triumphantly moved towards the wooden trunk. But I was in for a disappointment. It was locked! Oh God! Why was such an innocent investigation braced with so many difficulties? I just could not afford to spend my whole afternoon up here without getting discovered. I almost gave up after glancing at the sturdy lock. Though it was rusty, it was not to be messed around with. And trying to find its key or asking someone about it was next to impossible. But I was not going to give up so easily. As I started searching for something which could help me, my eyes caught something. It was a wrench! Never was I so glad to see a tool before as I was now. I quickly grabbed it and started working on the lock. After sometime (which seemed like an eternity to me) the poor old thing gave in to my determination.

Now was the moment of truth. I anxiously opened the trunk and it creaked and groaned shattering the silence in the attic. The trunk contained a world of its own. It was like a kaleidoscope of antiques. It contained all the fancy stuff that we usually just talk of. It had trinkets, wigs, costumes, candle holders, some papers, and a personal diary…. As I was about to pick the diary and open it, something caught my attention…. It was a lamp. No, it was not our regular lamp but the one which I had seen in fables and fairy tales. It was a genie lamp!! And was I glad! Seeing it ignited some kind of hope in me. Would this be magical? Will a genie pop out of it? Will it fulfill some of my wishes? I was not interested in anything else now, not even in reading the diary. I had discovered my treasure.

Just as I was about to rub the lamp, I heard my mother calling me. Her tone indicated that she must have done so several times and now she sounded irritated. I had no intention of infuriating her further. So, I set the lamp aside, quickly put all the contents back in the trunk and closed it. I got up, dusted some dirt off my clothes and grabbed the lamp. I then started climbing down the stairs with the lamp hugged to my chest. It was mine. I was grinning ear to ear. After all, I was the cat who had the cream.