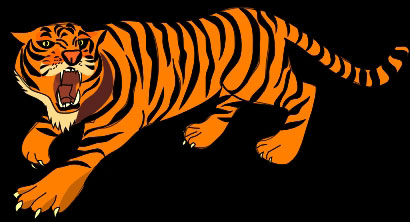 “The Solitary Tigress” is one of the outstanding stories of the second biannual International Short Story Contest 2017 written by Zara Moretto, France.

Silence hung like a light veil on the misty mountain, muffling all sounds. The wind tickled the trees and snow fell in thick snowdrops, blanketing the rocks and powdering the treetops. A tigress was standing proudly on a jutting outcrop of rock, her figure silhouetted against the dying sun. When she roared it stabbed at the peaceful silence and filled the mountain with a cavernous echo. Her eyes hunted through the smooth rocks of the mountain, searched among the trees in the forest, scanned through the valleys unfolding like a map under her fierce gaze, looking for something, urgently. Seemingly having found her quarry she leapt off her rock. Snowflakes settled on her thick coat and she left light pawprints on the soft snow as she descended the mountain looking for whatever she needed to find.

The tigress found the thing she was looking for, a cave in which she could give birth. She introduced her head into its dark interior, and much to her surprise saw another tigress curled up in there. A menacing growl emanated from deep inside her throat as the other tiger pulled her lips up over her shining teeth and arched her back, ready to attack this intruder for trespassing on her domain. However, as the other tigress prepared resolutely to attack, she noticed three shivering cubs lying in the corner of the cave, only skin and bones, huddling together for comfort and yelping pitifully at the sight of this imminent danger. Pity seeped through her cold exterior and, giving a final growl, she backed out of the cave into the growing snowstorm.

The snow whirled around the tigress’ head. She was having trouble finding a new cave to use, when she saw one hidden between some fir trees. She padded across the snow and ventured inside. It was perfect; warm, comfortable, uninhabited and the pine trees offered protection from the biting wind. She sat down on her haunches at the back of the cave, curled her tail around her to keep out the cold, licked her soft pelt and waited for her time to come. However, it was only when the moon shone through the thickening snow, bathing the cave in a soft silvery glow that she gave birth. Four cubs breathed their first breath that night in the small cave.

They tottered towards their mother on fragile legs, buried their faces in her striped fur and drank the tangy milk that their mother was providing. Within ten minutes the cubs were asleep and the mother curled around them, licking their fur with her rasping tongue. Her eyes twinkled in the moonlight and she seemed to smile down at the cubs as she laid her head down in front of the cave’s mouth to protect her new-borns from the freezing touch of the falling flakes. The snowstorm whirled around them, but that didn’t disturb the new family; the rocky walls of the cave muffled the howls of the wind and the only sound that filled the small cavern was the five tigers’ deep breathing.

When the snowstorm ceased and the fallen snow covered the mountain in a snug blanket, the weak sunlight infiltrated itself through the trees and shone on the untidy pile of sleeping tigers. The tigress was already awake, tenderly licking the sleeping cubs’ heads. When she was sure that none of the cubs would wake up anytime soon she pulled herself up and noiselessly padded out of the cavern. Her entire kingdom was covered in a thick layer of snow, the tree branches were sagging under their burden and the light grey of the rocks that ruled the mountain in summer had been blotted out completely by the crystal white of the snow.

The tiger swept the horizon with her gaze, picking out the slightest movement with her acute vision. She hadn’t had food for a week before the cubs’ arrival and she needed it desperately. She saw a shadow flit between the trees and she tensed: a deer was picking its way through the forest that grew at the foot of the towering mountain. It was making its way towards a small pool which the cold hadn’t frozen yet. The tiger leapt soundlessly down the mountain, stalking her deer who was now sipping at the crystalline water of the pool. Crouching low behind a tree, tail swinging from side to side, the predator readied to pounce. The deer sensed something was wrong; it was scared, flicking its ears nervously and gazing from side to side with large coal-black eyes.

The tigress crouched low among the trees, fixing her gaze on her prey. She had to act now or the deer would run away. When she was close enough to her quarry she leapt into action. A ripple of muscle ran across her body and she was power impersonated as she leapt onto the surprised deer’s back. The attacked animal bucked and plunged trying to throw the tiger off balance but the attacker was too strong and the deer sank into the snow. The tigress plunged her teeth into the deer’s neck and finally got the first meal she had had in days. She dragged the prey up the mountainside to the cave where the cubs were waiting for her, exploring their home, bumping into the borders of their small lives. They watched with bright eyes as their mother dragged the dead deer into the cave. She was settling down to eat it when a deep growl resonated outside the cave.

The tigress leapt up and pushed her cubs behind a sheltering rock and hesitantly stepped outside to face the danger that awaited her. But it wasn’t a surprise to her when she saw a towering tiger standing outside the cave. She had been dreading his visit ever since she had become pregnant with the cubs and she was right to be afraid of him. This male was the most powerful tiger in her area and he wanted to mate with her because she was one of the strongest tigresses; however, she had mated with another, and now this male was here to kill the offending cubs. But the mother wouldn’t let him. She growled and bared her teeth as he advanced towards her, intent on gaining entry into the cave. He was about to succeed when, in an act of pure desperation, she leapt onto him and pinned him to the ground. The male tiger growled and scratched at her forepaw, leaving a large gash, but she roared deafeningly and the male, intimidated by her fierce attack, leapt up and ran off, his pride crumbling beneath him. The mother limped into the cave once more and her cubs pressed their trembling bodies against her in search of comfort, but they had no need to be afraid, for that was the last that they would ever see of that tiger.

Winter shifted into summer like clouds flitting across the sky. The ice thawed, the snow melted and the dark clouds cleared from the sky. The mother’s cubs were older now, they had learned to hunt and were ready to take care of themselves. She had known that this day would come but she was still saddened as one by one her cubs left the cave and padded down to the forest or over the mountain to go and fend for themselves. By the end of the summer the only cub that was left was the runt of the litter, but the day came for him too.

As the sinking sun cast its last beams of light onto the mountainside, the tigress laid her head on her paws and watched with faint pride as her last cub disappeared through the trees. She had managed what most tigresses failed at, she had raised all four of her cubs through infancy and had had the chance to watch them follow their own destinies, reassured that they would survive. She picked herself up off the forest floor, turned around and jumped from rock to rock to the top of the mountain. The mother lay down on the rocky peak and watched the world unfold before her eyes: the trickling streams, the sparse trees, the rocky cliffs and the grassy hills, ready to continue her life as a solitary tigress once more.