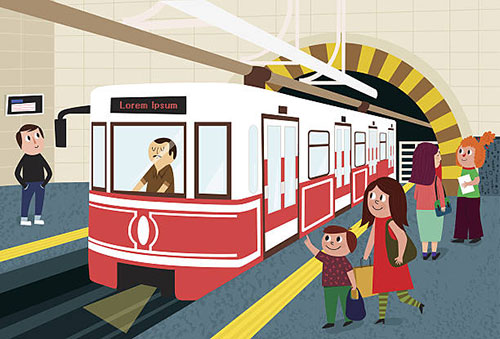 “The Silver Lining in My Cloud” is one of the outstanding stories of the second biannual International Short Story Contest 2017 written by Varchasva Sharma, India.

The Silver Lining in My Cloud

Escorted by my septuagenarian grandfather - whose house is at a sweet distance from ours - I had just attended a debating skills improvement workshop at the British Council in New Delhi. We were having loads of fun when something terrible happened.

Now I thought I was a very balanced boy and entertained the same idea about my grandfather. My grandfather used to take me to such skills improvement courses almost every fortnight and whenever we went to those workshops we commuted by Delhi metro. I always found metro travel so joyful, exciting, fast, noiseless and dependable. One could always keep one's appointment and appearance. Then to find a seat for me and my grandfather I usually ran inside first and would look for a seat. My parents always told me not to enter the train first because I could get lost and blah! blah! blah! But I never listened to them, and that got me into trouble.

That day when we were on our way back from the British Council, we stopped and bought some candies at the Rajiv Chowk metro station. When we reached the metro station my grandfather and I stood in a queue to board the metro. For a while I wondered at the marvelous architectural beauty of the sprawling metro transfer station though it was quite crowded. When the metro arrived, as was my wont, I ran inside to grab a seat. But when I went inside to find a seat, I noticed there was no vacant seat anywhere. I thought I would go to my grandfather and then I noticed he wasn't there anywhere around!

When I got down at the next station, I waited there for about twenty minutes. When my grandfather did not arrive I started to look for a security guard or a policeman. After wandering around for some time I came across a group of army men holding guns and chit-chatting with one another. I approached them and narrated my problem to them. One of the army men gave me his phone, and told me to dial my father or my grandfather. In embarrassment, I told him that I did not know their numbers but as I knew my mother's number, I called her up. Despite my five attempts my mother didn't take my call. The other army men boosted my morale and gave me a metro token and told me to go to the station nearest to my home, while he would inform the authorities.

I immediately boarded the next train to Huda City Center. While on the train, I saw a man with bloodshot eyes, staring at me from five seats away. The train was quite empty at that time and so I quickly went to the next compartment. I soon noticed that the man came to the same compartment and sat beside me. At that point I thought as if the man could be a kidnapper! But the man got up from his seat and got down at the next stop. I realized I was getting too paranoid and scared. My station was still three stations away.

After quite some mental turmoil I finally reached my station. I got down from the calm metro to a fish market. The station was big, noisy and crowded. I squeezed my way through the crowd. I was going to put my token into the machine when I felt an urge to use the bathroom. I asked a random stranger where the washroom was. And out of the blue a question appeared from the stranger "What is your name?" In a hurry I told him my name. He asked me to follow him to the control room. When I entered the control room I saw my grandfather and the manager in-charge of the station. My grandfather waved at me with joy, the exact opposite of what he had done when I was separated from him. I was also delighted beyond words to meet my dear one!

The incident, no doubt was analysed at home. My grandfather told me separately that there was fear on his face on account of the issue of my safety once I was separated from him and also a fear of how my parents would consider him careless and not dependable. He explained that through his gesture he had intended to encourage me to keep going to the last station - my destination. My mother explained that she was unable to take my call from an unknown number as she was busy lecturing a new batch of trainees in her office. My father whom my grandfather had informed about the episode, stayed at home to coordinate matters, maybe also wondering how he could defend his father's lapse. My grandfather explained that the unfortunate incident had happened as there were two types of metros on the yellow line- some that plied up to the last station Huda City Center and the others that terminated at the Qutub Minar station. As it was the Qutub Minar one, the old man didn't board it but the boy rushed into it unmindful of which metro it was. He explained that before reaching Huda City Center, he got two announcements made over Delhi metro network about our separation. Of course his not getting down at the next stop was the ‘tragic flaw’ of the story.

There could be more analysis and I too had a few points ready for explanation but I certainly felt my grandfather at 72 could not be blamed too much as it was a case of a lapse on my part too when that day I - an eleven year old- failed to look after my grandfather. For sure, this experience of a single afternoon seemed to have added maturity of a couple of years to my age.