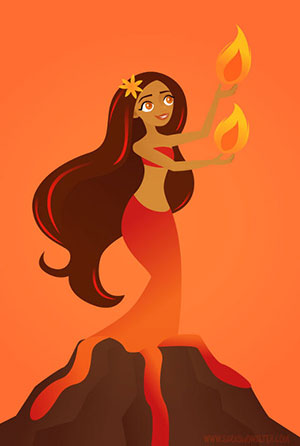 “The Four Seasons” is one of the outstanding stories of the second biannual International Short Story Contest 2017 written by Amanda Li, Hong Kong.

Lucie is a young lady who works as a firewoman. Today, after work, she sat in her car, admiring the diamond ring her husband had given her. Outside her window, a group of men stared at the jewel. "That must be the Diamond of Winter," one of them whispered. Lucie frowned at them.

That night, Lucie was so tired she fell asleep without changing, her cloak still wrapped around her.

"Just one left until the Four Seasons are united again," a voice whispered. "The last one: Winter. A diamond." Another voice spoke, "Yes, Master. I have sent our men to find it. They believe it is in the hands of a girl named Lucie." The master hissed, "Tell them to attack at night. She will be fast asleep." "Of course, Master. Today?" "Today. Before she notices the power that stone holds."

Lucie woke up with a jolt. There was someone who wanted to steal her diamond ring. But it was a dream... dreams weren't real, were they? Then she remembered, "That must be the Diamond of Winter" one of the strange men had said. Was it possible that her dream was real? That the group of men had been the men mentioned? Trying to persuade herself into thinking that her vision was the "Diamond of Winter" issue and her fear of the diamond being stolen combined and not real, Lucie fell into an uneasy sleep.

"Ha-ha! I, finally, shall regain my rightful position as the heir of the universe! The Ancient One will rise again with the help of his Four Seasons and I!" The master from Lucie's dream proclaimed loudly. Then he bent over her. "I command you to tell me where you have hidden your diamond ring!" As Lucie opened her eyes, she saw that she was in a gray room, on the floor, with a knife to her throat. "I... I keep all my jewelry in my room, in a wooden box on my bedside table..." Lucie trailed off. "Fetch that ring!" the master barked at his soldiers. He pinned Lucie to the ground. Lucie wasn't a genius, but she knew that the master was preparing to do something horrible to her. And so, before the master could stop her, she pushed him off and ran. She spotted a clump of woods and quickly dove in.

"Who are you? How dare you intrude in the Wolf Pack's territory! Our Alpha will hear about this." A black nose was poked into Lucie's face. She screamed, picked herself up, and ran straight into a cave. A huge wolf sat on a big rock in the middle of the cavern. On his sides were two wolves who looked like they might be bodyguards. "I am the Alpha. What brings you to our pack?" asked the Alpha. "Please help me! My diamond has been stolen and those people are saying it's the Diamond of Winter or whatever..." Lucie barely had time to finish her sentence before the Alpha leapt off the rock and bounded towards a tunnel in the cave. "Come, we must stop them! Explain to me what has happened." So Lucie told the Alpha and his pack what had happened.

Lucie shuddered. "But how?" she asked. "I don't know. But we have to try. If we stand by, we will be killed anyways. There is a way to destroy the Seasons... the last Alpha said we must find the Fire Goddess. She was created by the Ancient One, but sometimes helps in wars. The master may have bought her over, though, so we must be careful... This tunnel leads straight into her palace."

As they neared the end, they saw two guards carrying spears, blocking the entrance. "Who are you?" one of them asked. "I am the Alpha of the Wolves. This is my pack and this is a human named...?" "Lucie," replied Lucie. "Come with us," said the other one.

"Who are you, and what brings you here?" asked a voice. Lucie and the Alpha (the rest of the pack were outside) were kneeling on the floor. "You may speak." "I am Alpha," said the wolf, "and this is Lucie. We need your help for destroying the Four Seasons. Please." The goddess laughed. "Yes, the Four Seasons. They have awakened." At Lucie's confused look, she explained: "When the Seasons were captured, they were put to sleep as well." "Oh." Said Lucie. "I will help, but only for a fair price." "Name it, then." "You, yes, you, Lucie, must complete three tasks. That," she said, clapping her hands, "is your first."

A metal plank stretching from in front of Lucie to seemingly the end of the earth appeared, bathed in flames. Lucie gasped and her hand flew to her mouth. "No," she stuttered, "no, I-I can’t possibly walk from here to there... I really can’t!" "Oh, but you can," said the goddess. "Now go." Lucie disappeared. The alpha yelped. Then Lucie appeared on the plank, eyes wide with horror as she realized that her feet were burning. Lucie smothered the flames with her cloak, but more fire covered it. Then, Lucie had an idea. Her cloak was fireproof. She curled up in a ball, wrapped her cloak around herself, and rolled across the plank. "Ah!" "Ah!" Lucie

"A smart girl, indeed! Yes, I must admit that was clever." The Fire Goddess smiled. "And now, you must feed the uief (pronounced yoo-eef)! Yes, the uief, the wonderful creature, feared by thousands!" "Um... what is a uief?" questioned Lucie. "A uief, my dear, is a 5-headed lion. The heads of a bear, a snake, a wolf, a leopard, and a spider! Remember, you must actually feed it, not just throw the food to it. The uief feels offended when treated that way. Oh, and beware, the spider may be the most dangerous of all." Well, if just a mere spider is the most dangerous, than this should be easy, thought Lucie. Oh, how wrong she was. "Free the uief!" the Fire Goddess said. A moment later, a door in the wall opened, and a monstrous creature barged out.

It had five heads: a bear, a snake, a wolf, a leopard, and a spider, like the Fire Goddess said, but the spider was huge. Like, HUGE. It was bigger than any of the other heads, all of whom were snarling, spitting and growling. Wow, thought Lucie. Easy-peasy. Note the sarcasm. And oh jeez... what was the spider spitting? Acid? Oh great, just great, an acid-spitting monster spider. No wonder it was the most dangerous. Oh, well.

"What do I feed it?" asked Lucie, eyeing the beast. "Yes. Here," the goddess held out a hand, "that should be enough." Lucie accepted the large, sticky, bloody (ew!) piece of meat and tried to get close enough to feed the piece of meat to the uief. It spit acid at her and tried to bite her. Lucie rolled, ducked, and jumped, barely dodging the deadly balls of spit. "Gah! How am I even supposed to feed this thing?" Lucie shrieked in frustration. Then she promptly threw her cloak to the ground. The uief cocked its heads, then came closer, snapped her cloak up, then kept staring at her silently. Lucie was surprised. She inched closer and held out the meat the uief sniffed it, then ate it.

"Humph. Well at least the uief won't starve. But that was pure, accidental luck. And now for the third and last task! Feed me an ice cube." "WHAT? But, but, you... you're made out of fire! How do I feed you ice?" screamed Lucie. "How? How? Oh, yes, yes... A FREEZER! YES!" screamed Lucie. "But where will I get a freezer? Where?" The alpha (Lucie almost forgot about him) said: "I'll get it! It's one of those... box-things, right?"

"Open your mouth, one two three, go!" Panting, Lucie tipped the heavy freezer over. A single ice cube fell into the goddess's mouth. "Thank you!" said the beaming Fire Goddess. "Now I shall help you."

"The diamond of winter... complete, reunited with its brothers! Come to me, master! Rise and awaken!" The master shouted. "No, you shall not," boomed the Fire Goddess. "Now, tell me, would you like to burn? Actually, I don't think you have a choice..."

Lucie stared at the piled of ashes. "Can... can I go home now?" She asked weakly. "Of course." And with a wave of her hand, the fire goddess sent Lucie back home... and into her blankets.

Lucie never told anyone. But she always remembered the Fire Goddess and the Alpha, and how they helped save the world.