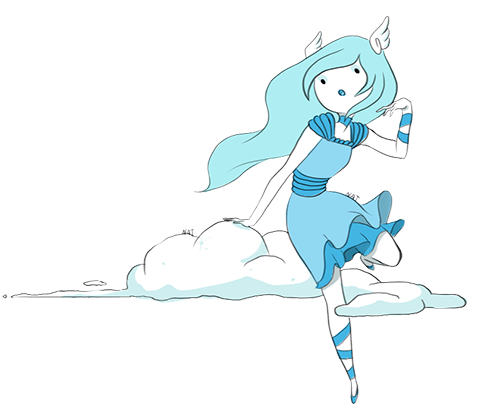 “The Adventure of A Fearless Drop” is one of the outstanding stories of the second biannual International Short Story Contest 2017 written by Deshna Jain Kishore Kumar, USA.

The Adventure of A Fearless Drop

Hi! My name is Celeste! In my world, we all have jobs where we work in groups to run something called the “Droplets Dream”. In this organization, we make a little droplet’s dream come true. All that a drop wants is to travel around the world. I am the princess of all droplets and I control the whole Cloud Kingdom. You don’t become a princess by being chosen or elected. You are born to have those special features. A princess rules until another princess is born. When every drop starts the journey, the princess wants to go too, so she will also get to go on her dream trip whenever she wants. I… well, I didn’t want to go just yet so I was urging other workers to go first, and they happily obeyed.

Then, one day as I was sitting on my throne, muttering, “Oh, I have the prettiest dress” and watching a drop’s flight, I heard a grunt and got pushed into the trip’s runway, where the drop gets ready with gear. You were not supposed to jump on the trip runway, which I was doing in this case. Unfortunately, because I was in the wrong position and did not have any protection, I got shoved in the “Drop Down” tube. This is the tube where you get prepared for your adventure.

A voice said, “You do not have any gear, but you do have a very pretty dress. We will safely get you to your destination.” Of course I have the prettiest dress. Then, I was coming to an end, where I would get launched into rivers and start my journey. But I heard a rather loud grunt. That might have been normal, but the tubes switched me to some other place far away from my throne, which got me worried. Then, the tubes gave a huge push from behind, and I was precipitating to bare ground below!

The wind blew through my hair as I was plunging down. My feet and hands turned blue and I landed with a big thud! I knew I was marooned now, but I wasn’t afraid. Before I could take a single step, the dirt sucked me into the ground. I sank deeper and deeper and finally, I landed with a splash! I knew all the kingdoms (clouds), 1000’s of them, and could recognize some other drops in this…. cave water, I take a guess.

Suddenly, some very dirty drops showed up in front of me. These drops were covered head to toe in muck and mud. They sneered, “What are you doing in our cold groundwater reservoir?” Then they started getting me dirty. One of them said, “What’s with the pwetty wettie dressie? You seem to be a princess.” I replied, “Of course my dress is the prettiest. Everybody knows I won the Princess Elegance Competition.” Those drops looked at me like I was some untrustworthy invader. “Enough with the bragging. You look too polite to get respect from us. Fight for the respect if you can, which I don’t think you will.” said the leader. And then they shoved me underwater.

I was enraged by what they had done, but I stayed calm. They don’t know how strong I am, I thought, No Pain. No Gain. Always be brave. With that thought in mind, I raced into one of them, but they guarded themselves and blocked me off, in which I fell underwater again. No pain, No gain. Always be brave, the thought kept coming into my mind, so I never gave up and fought with all my strength, until I finally defeated the drops.

They stared at me with amazement. “H- How could you have done that? You seem very strong for a princess. Our princess was very worried and weak. She was never audacious and clear like you. We were mistaken about you. We need to give you an apology.” I became gentle and opened my amulet. Its glowing light turned into a ball and I held it, gathering power. I then gestured to attach it to the dirty drops to make them sparkle again. “Apology accepted,” I said softly. The water shimmered even without any sunlight, and the heat warmed up the reservoir’s cold atmosphere. “Thank you for making us realize the message,” the clean drops said in unison.

As I was closing my amulet, I heard a loud rumble. Something very big was digging through the dirt, and I saw a man collecting water in a bucket. He picked me up along with the clean drops and a few others. He took us to a river and dumped us there. We were in a runoff so we rushed into a place filled with men. They seemed to be doing something, like condensing water to make it cleaner, filtering it, and many other things. I did not want to be picked up by these men because I wanted to go home. I said to the other drops, “Look, you’re getting a beautiful opportunity. Use it to get back to your kingdom.” The drops said they didn’t care because they could get this opportunity later.

I really hoped I wouldn’t get picked up, and while I was waiting for the men to pass by, I planned my route. I would evaporate into water vapor, and since I could control where I went, I would steer straight into my kingdom. If it was precipitating right when I was condensing, then I would wait to be evaporated again.

So I passed the men and it was all still water, so I waited and waited and by Solar Radiation, my hands and feet started turning to normal color again. I drifted into the air and started to look for my kingdom. Finally, I spotted it, my kingdom with its own unique pink tint. I started to steer towards it, but a strong wind pushed me into another kingdom. When you land in another kingdom, you don’t get to live there. You start condensing from water vapor to tiny droplets to drops again. So I precipitated and landed on the leaf of a plant. Before I got infiltrated into the ground, this time a leaf sucked me up. Ugh, again into the water cycle!

But fortunately, the sun shined brightly and I transpirated back into water vapor. This time, there was no wind, so I could steer myself to my kingdom. Now I am proudly sitting on my beloved throne. As I look at the drops who didn’t accept the opportunity, I can see they are stuck in an endless cycle just because they think they will get more chances.

Afternote - “Opportunity knocks on your door only once. It is your choice whether to accept it or not.”

If you get an opportunity you should not waste it. You can’t just sit around all day thinking you want to do something. Make good use of any chance with strong determination & dedication.