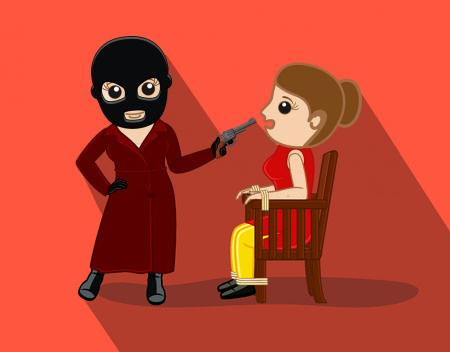 “Kidnapped” is one of the outstanding stories of the second biannual International Short Story Contest 2017 written by Harshita Pinneboina, USA.

Part One: The Plan

“Did you find something you like, yet?’’ asked Karen.

Four, close friends, Lauren, Jen, Karen, and Erin, were all spending the summer at Erin’s house in Hollywood, California. Well, it was called a house, but they thought it was more like a mansion! Erin’s mom was a movie star and she was starring in a new movie called, “The Silent Signal”. Unfortunately, something had gone wrong with the movie. All the cast members were jealous of Erin’s mom because she got the lead role! One of Mrs.Lorno’s coworkers, named Gracia Barnes, had even threatened her. She said that if she did not give up the role, she would harm Erin. It was very dangerous now for Erin or Mrs.Lorno to go out without a bodyguard.

Since the girls were spending the entire summer together, they were going to redecorate Erin’s entire room! They were looking on Pinterest for ideas. Meanwhile, Lauren was busy trying to find something fun they could do that night. Erin’s mom would be at rehearsal and the cook was sick! They would be the only ones in the house.

“Hey guys,” she said, “I have a crazy idea! We can sneak out to the subway at night and meet Jack and Laura there!” Jack and Laura were Erin's cousins. The four girls thought about it and finally nodded their heads in agreement.

“Alright, I’ll text them,” said Jen. None of the girls could wait for that night!

It was midnight. The girls had changed their clothes and were on their way to the subway. Erin was nervous though, because there had been a kidnapping in that area recently. However, she wasn't going to back out of this plan! Soon, they had reached the subway. Jack and Laura were waiting for them. Erin went to the restroom to fix her hair. The strange thing was that subway was open at night. It was never open at night. Once they had to break in! They were too busy talking that they didn't realize that Erin been gone for over an hour! Finally, Karen noticed, and she went to check on Erin in the bathroom. She saw that the window was open and Erin wasn’t there!

Erin was gone! Everybody started talking at once when Jack took order of things. “Okay, now everybody calm down. Karen, you check out back to see if there is someone back there. Jen, you call the police. Lauren, you call Mrs.Lorno and tell her that Erin is missing.”

“I can’t do that! Mrs.Lorno doesn’t know that we’re out here right now! We didn’t ask her,” said Lauren.

Jack didn’t care. “Erin is her daughter and she has a right to know what happened. I can’t believe you girls came out here at midnight without telling anyone, especially knowing that there has been a recent kidnapping here. Laura and I told Sarah, the cook, that we were coming.”

Realizing that Jack was right, the girls quickly performed their tasks. Mrs. Lorno and the police arrived almost at the same time. Jen tried to comfort Mrs.Lorno as the police looked around. Suddenly, Karen let out a piercing scream! Everybody ran to find her. “I found the ransom note!”

Karen took the note and started to read it. As she was reading it, she looked perplexed. “What does it say,” asked Jack. He walked over to examine the letter. Karen looked up from the note. “I don't know”, she said. “It looks like it’s in some other language, like it is written upside down or something.”

Jack took the letter. “Wow! It really does look like it’s written in a different language!”

The police grabbed the letter out of Jack’s hands. “This guy didn't do anything too hard. It's just the old fashioned mirror writing.” Jack looked confused. So all we have to do is hold it in front of a mirror?” asked Jack.

“Well”, said Mrs.Lorno, “It certainly doesn’t mention who the kidnapper is.”

The police smiled at her. “Well, we’ll find out in two days.”

Jack had been busy thinking the whole time. “I think I have a plan.” Everybody stared at him. “Listen up guys. In two days we’ll find out who the kidnapper is. We aren’t supposed to bring the police, but of course we will. The police will hide behind the two doors of the back alley. Mrs.Lorno will take a bag full of bricks with her to look like she’s carrying money. When she’s about to hand the bag over to the kidnapper, the police will jump out from behind and tackle the kidnapper. One of us will go and drive Erin home while the police take the kidnapper to jail.

Mrs.Lorno and the police nodded their heads in agreement. “Sounds like a good plan Jack,” said the police.

“But why does someone have to Erin home right away?” asked Mrs.Lorno.

“If the kidnapper brings anybody else with him then they could all tackle us while Erin is there. That’s why it’s good to take her home right away. Oh, and by the way, we better send out a fake rumor that you quit your role, Mrs.Lorno.”

“Oh yes. My producer can do that right away. I’ll tell him at once.”

Lauren sighed. “I guess now all we can do is to wait and see what happens.”

The night of the meeting, Jack, Laura, Jen, Karen, and Lauren were all waiting with bated breaths in the car. They had parked it at the entrance of the subway so they could get a clear view of everything. It was almost a quarter to midnight. The police and Mrs.Lorno were waiting for the kidnapper to arrive. Suddenly, they could hear someone walking through the bushes. The kidnapper and Erin stepped out of the bushes. The kidnapper was wearing a mask, so you couldn't see his or her face.

The kidnapper turned around to see if anyone was there. “Did you bring the money?”, asked the kidnapper. The kidnapper was a lady. They could tell by her voice.

“Good. Here is your daughter.” Just then, Erin stepped out from behind a bush and walked toward them. “Now hand over the money.”

“Stop right there. Alright, let’s see who this is.”

The kidnapper tried to escape but she couldn’t. Jack, Laura, Jen, Karen, and Lauren came out of the car. Jen grabbed Erin by the wrist and led her to the car. She quickly scanned the area for any prowlers, and they left.

Meanwhile, the kidnapper kept yelling and saying that she told them NOT to bring the police and that she would get revenge on them. The police pulled of the mask. Everyone gasped. It was Gracia.

Mrs.Lorno stepped forward. “I should have known it was you the whole time”, she said in cold voice. “I didn’t think that you would carry out your threat on my daughter.”

“I warned you”, said Gracia in an angry voice. “You came out at your own risk.”

The police sighed. “Well Miss Gracia, you will be spending a lot of time in jail from now on.” And with that, they went off in the police car.

Jack stepped forward. “Well now I guess that the case is solved, we should go home and see how Erin is doing.

The group climbed into the car and went home.