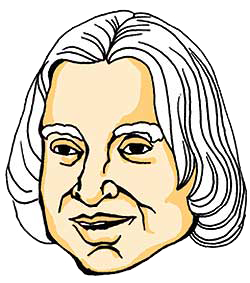 “Dream Bigger Than Your Imagination!” is one of the outstanding stories of the second biannual International Short Story Contest 2017 written by Himakshi Shastri, UAE.

Dream Bigger Than Your Imagination!

Once upon a time, in a remote village in India, lived a young boy born to parents of poor means. The little boy had two passions: one was the thirst for knowledge and the other, a passion for reading.

Now, for you and me, if we want to read a book, we simply ask our parents to buy it or borrow it from the library, but this little boy did not have money to buy books and his village had barely enough food, let alone a library! Undeterred, the boy did some odd jobs for a kind professor who let the little boy read books from his collection.

Books ignited the boy’s mind and so enthralled was he with them, that he would often be found immersed in a book reading by the light of a candle.

The Second World War finished and Mahatma Gandhi declared, "Indians will build their own India."

Inspired by Gandhiji, this little boy secretly wished for a chance to do something great for his country. "For this, I need to be educated well,” he thought sorrowfully. But, he never dared to ask his parents to send him to school as he knew that they couldn't afford it. But fate had another story in mind for the boy, for one day, his father came up to him, and to the boy’s utter astonishment announced, “I know you've always wanted to pursue higher studies. Your mother and I, aren't highly educated, however, we have great dreams for you. Don't worry, we will somehow arrange money for you to study in a good school."

The boy’s soul danced at the thought. Soon Abdul, armed with his sparse belongings but abundant zeal, left to study in The Schwartz School, in Ramanathapuram, a bustling town that lay across the sea.

In his early school years, the little boy, unfortunately, had average grades. However, his teachers knew that he was a bright and passionate student who had a desire to learn. He spent hours on his studies, especially English, as that was his favourite.

One day, as he was in a hurry, the boy stepped into the wrong class, where his strict English teacher was taking a lesson. The teacher glared at him icily through his black horn-rim glasses and admonished, "What are you doing in this school, if you can’t even find your way to your class? You should go back to your village." Enraged, the teacher caned him, in front of the entire class. The little boy was crushed. His family had made great sacrifices towards his education. But failure and rebuke lit determination and Abdul vowed to become an outstanding student.

Abdul studied night and day. But, he had a secret passion he could not give up. Reading. Thus, at midnight, once he completed his studies, the little boy read. It may have not been his assignment, but he adored going on adventures as the stars twinkled in the night sky. Months later, his goal of scoring full marks in his English exam finally came true. He was thrilled! The next morning, during assembly, the same teacher who had punished him earlier, stood up, smiled and said, "Whoever I punish, becomes a great man!" Everyone in the assembly, burst out laughing. The teacher then recounted what happened. He pointed to the little boy and added, "Mark my words; this boy is going to bring glory to his school." His praise quite made up for the earlier humiliation.

After he went home after his semester, his family rejoiced. His mother made mouth-watering treats while his father went all over Rameshwaram distributing them. Abdul finally felt that he’d done something worthy, but there was still lots to be achieved. The little boy went from strength to strength, never satisfied with being mediocre.

And one day the little boy, who was extremely poor and came from an unknown, remote village became … the President of India!

That little boy’s name is Abdul Kalam – and this is his story. When questioned about what inspired him, he said:

“Books gave me courage at the time of failures. Books touched my heart and soul, and books were my greatest friends. Today’s reader, tomorrow’s leader.”