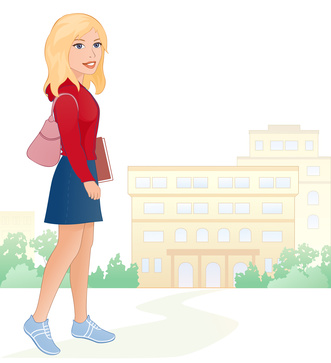 “Xenia” is one of the outstanding stories of the first biannual International Short Story Contest 2017 written by Anahita Susan Stephen, India.

Calling Xenia’s home big would be an understatement because her house was ENORMOUS. She was from a very wealthy family yet she was not spoilt like most rich kids are. She lived in California with her two elder brothers and one younger brother and was the only girl in her family.

Her mother had died a year after her youngest brother was born. She was only 8 and yet she had controlled herself better than her father and two elder brothers (Jakeni and Nicolai). She had soon taken it in her hands to cook, wash and look after her younger brother, Lucca. Xenia’s father had taken the longest to recover and because of that, Jakeni and Nicolai hated him, for they wished that he had been stronger but Xenia’s love for him only grew, for she knew that her father was a strong man and the fact that he had become so weak was only because he loved her mother more than anything in this world. She too hoped that one day she would meet a guy who would love her as much as her father had loved her mother.

Xenia’s mother was Italian while her father was American. A very unusual match. They had met in college at Cambridge, and for that reason, she had gone to Cambridge. She wanted to find Mr. Right. Unconditional love was all Xenia dreamed of from Mr. Right. Xenia was a HUGE romantic. She loved ANYTHING that included romance. She had thoroughly read all Shakespeare classics and absolutely adored Jane Austen’s writings.

The first day at Cambridge University had been extremely hard for Xenia, but she did not let it show, for she did not want anyone to worry about her. Jakeni and Nicolai had also studied here and a few years later, Lucca would too. However, she made a lot of friends in the two years she had been there. Although she had not expected any of this and was happy and satisfied with this, there was something deeply bothering her on the inside. She had not yet found true love.

There were a lot of boys who had crushes on her, but she had not felt anything for them. Luckily, she was a beautiful person, both from outside and inside, and so all the boys who had crushes on her were soon her close friends. She had helped a lot of them get together with other girls, made some of them understand life better, and made their sad days into happy ones. In short, she was always there for everyone.

One day, a new boy joined their college: Nick. Nick was not from a wealthy family; his family was middle class. Nick, just like Xenia, had lost a parent, but it was his father that he had lost. Nick’s father had been his superhero. Nick’s father died a year after his twin sisters were born and Nick had been only twelve.

Xenia, on the other hand, was tearing off her hair in the process of understanding WHAT WAS HAPPENING. She sulked every time she saw another girl talking to Nick. She spent her time daydreaming in the class about Nick’s features. She practically LIVED for Nick’s smiles. Xenia, unlike Nick, didn’t try to hide this. She showed her frustration so openly, that her bestie, France, actually suggested her to go for counselling. Which resulted in a whack in the head.

She admitted that he was very handsome and hot, he was tanned, had hazel grey eyes and blonde hair, everything she wanted her guy to have but she always tried to convince herself that he wasn’t into her.

A year passed by so fast and yet so slow. Xenia and Nick soon were best friends. Everybody wanted them to go out. Why, even the teachers were betting that soon Xenia and Nick would be going out! And indeed they did! But sadly, not for long.

The terrible news was that Xenia had leukaemia, the cancer of the blood. Jakeni, Nicolai, Mr. Jaren, Nick and ALL her friends were devastated. What made them even more depressed and shocked, was that she was in the LAST stage, which was considered as the incurable and most crucial stage. Nick was so unhappy that he was diagnosed as a clinically depressed man. He had lost his other half. His better half.

When the doctors announced that she was going to die, Nick rushed into the ward and held Xenia’s hand. “My dear sugar plum, always remember this, even when you are drinking tea and eating scones in heaven, I will always love you. No matter what happens, I will never get well again, with you gone. Remember, I will always love you,” whispered Nick into Xenia’s ear.

And just as he was getting out of the bed, he heard the words that would scar him for life, both in a good way and a bad way.

“I will always love you too, Nick”.