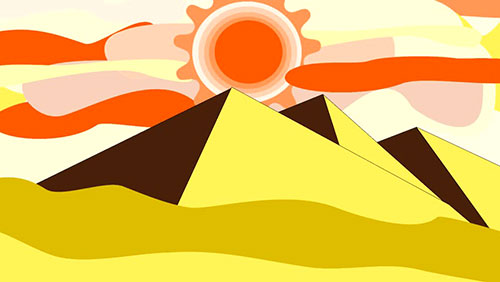 “Trapped in a Video Game” is one of the outstanding stories of the first biannual International Short Story Contest 2017 written by Yanik Tabone, Malta.

Trapped in a Video Game

Once I was at the Arcade with my friends. We played lots of different games including Star Smasher, Drop Balls, Slot Machine, Darkness, Rocket Laser and Cane masher. We were playing my favourite game called Rebel Skull Six. My friends didn’t know what kind of game it was but they still liked it very much. Then it was my turn to play the game but as I went to touch the red gigantic button something flashed in my eyes and-

When I opened my eyes I found myself in a place covered with lots of sand dunes and pyramids. I also saw a green old leaking cactus. I smashed it with an axe and began drinking its tasty water. Then I kept walking and saw a small creepy looking village. I saw people with golden stars on their chest and on their hats. I saw majestic creatures and black horses. I kept walking through the creepy village and I saw lots of small houses. I also saw a big sign that said: “Cactus Jack Bar”.

I went and opened an old grass gate. I saw people fighting, drinking and talking. There were lots of drunk people. I went to talk to an old man. We had a long conversation. Then he took me to his old, dusty and rusty house. He suggested that I should go to a place named Armadillo where I had to search for a particular drink called Gascer Minipulis from a bar named “Scavenger” in order to get back to the normal world. This would be the only way back home.

So I started my journey to Armadillo which was approximately twenty miles away from where I was. I hopped on the black horses and began my long journey. I saw lots of beautiful scenes including pyramids and herds walking with their shepherds leading the way. I was told by passers-by about farms where I could find lots of corn and delicious vegetables. I kept moving. The sun was starting to set and the beautiful moon was rising high above in the sky. I stopped my horse to get some rest.

The following day I packed everything and continued the journey. On the way, I saw the black train. I stopped to get my horse some food. I got him an apple and twenty-eight carrots. When I was just about three miles away, two deadly and evil cowboys attacked me with guns. Although it was a scary journey I still made it to Armadillo. Then I finally saw the glorious ‘scavenger’ then I drank the Gascer Minipulis.

I opened my eyes and saw my friends around me. I finally made it home and once back I told my incredible adventure to my parents. That was an unforgettable and amazing experience.