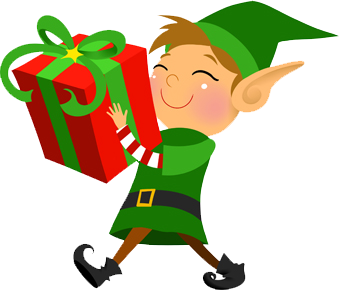 “The Santa's Helper” is one of the outstanding stories of the first biannual International Short Story Contest 2017 written by Michael, Indonesia.

One day, there was a little elf that went to Santa’s toy factory. Santa happened to catch a cold that day. So someone had to replace him as in charge. From more than a hundred elves he was chose to replace Santa for a day. So he went to the reindeers. The little elf was on his way to deliver presents.

At his first stop, there was a fire at the chimney. He extinguished the fire with a bucket of water and went down the chimney into the house. He stepped around a sleeping dog and was walking on tip toes when he suddenly tripped and fell over the rug. The noise woke the kids and they came down to the hall and saw the little elf dressed as Santa.

The little elf was frightened but he managed to hold out his hands and say “Ho ho ho!”

The children wondered why he sounded so different and childlike, “Why do you sound so weird?”

The elf said “Because I haven’t practiced in a very long time.”

In the hospital all the people kept saying, “Hi Santa, you’re real?”

But Santa wouldn’t answer; he was so sad that his little elf was at the prison. When the doctor had checked on him and prescribed medicines he began to leave but the people asked him not to go away. The Santa still wouldn’t answer; he had to get to the Police Station.

Since the elf failed and Santa was not sick anymore, Santa got to his own job again. He also thanked the little elf for trying to replace him and do his job. The elf was so happy to be back to what he was doing as an elf. Christmas was saved and all the children got their toys on time.