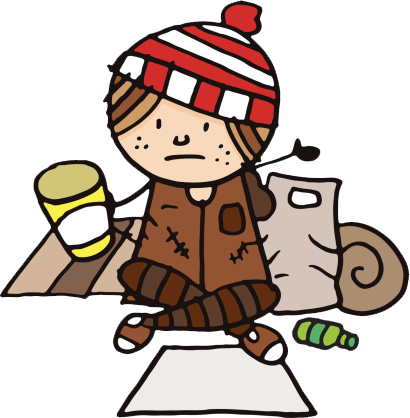 “The Poor Little Girl” is one of the outstanding stories of the first biannual International Short Story Contest 2017 written by Rachel Wilhelm, USA.

One freezing cold New Year’s Eve, a little girl roamed the dark streets. She wore no hat, no mittens, no coat, she only wore torn rags. She also had no name so she called herself Pat, short for Patricia.

Pat stood, staring through a window of a big house and watched as people danced and sang and ate roasted turkey. Then suddenly she ran “home“, which was between two buildings, with tears streaming down her cheeks. Why did she have to be who she was? Why couldn’t she have all the rich food that she wanted? But she couldn’t answer these questions, so she just cried to herself.

The next morning the sun came up through the mountains and spread its colors over the land but the fog was too thick and only let a dim light through. Pat stood up and started walking towards the streets to do her rounds of begging for spare pennies or extra pieces of bread. Some days she would be in luck but other days, not so much. People would be rude enough to just ignore her or they would say a mean remark.

Pat saw an old lady and limped towards her

“Dear, kind lady would you happen to have any pennies or a morsel of food for a poor, starving little girl?”, but instead of a smiling face turning towards her, an angry, scowling, and grumbling old face was what Pat saw.

“Scram you pest! Scram you filthy animal! Begging is for stray dogs; not for a greedy girl who’s hungry! Scram! Go home!” the old hag screeched in Pat’s face.

Pat’s eyes began to water, not from sadness, but from anger. She clenched her fists and she gritted her teeth, but before a word could escape from her mouth a loud voice suddenly boomed,

“What’s going on here? What’s the matter? Hey, why are you screeching at the poor girl! For shame! Go on now leave her be!” It was an old man that Pat had seen passing in the streets, he was an actor and earned money by performing plays with his two border collies, or showed off the tricks that his dogs could do. The two dogs stood tall and proud beside their master, ‘Yanis’ as the people called him, wore strange clothes for acting and also wore a big white beard. Yanis had kind, twinkling silver eyes and was a very laughable person, but for now his eyes were set on the old lady in a cold stare.

The old lady finally turned and waddled off mumbling and grumbling, and the crowd that had been drawn to the yelling, started to thin out. Then Yanis turned his now silver eyes towards the shrinking little girl.

“I have seen you here before. What is your name? Where do stay?” the old man spoke gently.

“My name is Pat,” she answered quietly. “I - I stay between those two buildings and use the torn sheets and clothes that people throw out.” Pat pointed toward the alley.

“Well… hmm… maybe… What do you think Buster? What about you Rascal?” Yanis looked at his dogs beside him. “You think we could use an actress?” The dogs both wagged their tails and whined. “I take that as a ‘yes’!”

Yanis hugged Pat and the dogs licked her hands, “Welcome Pat. You are now an actress.”

Once again Pat’s eyes filled, but this time out of pure joy. She was going to live with someone! She wouldn’t be lonely anymore. With the dogs and Yanis, she would be a normal girl, she would be happy!

“Thank you”, was all Pat could whisper.