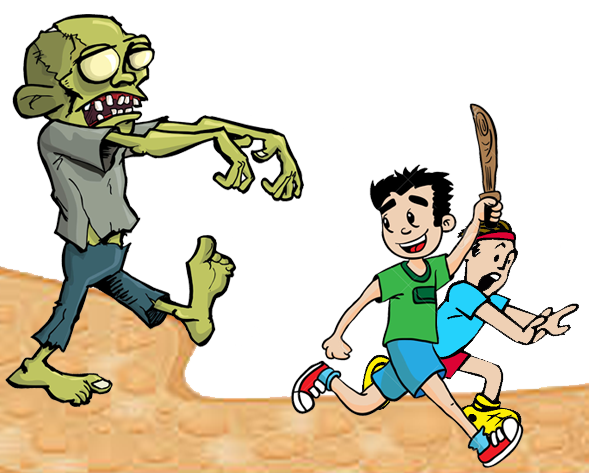 “The Last Survivors” is one of the outstanding stories of the first biannual International Short Story Contest 2017 written by Fardeen Faizal Mohsin, UAE.

“Get out of here!” yelled Wayne as the building started to shake.

Max needed no encouragement, he immediately took his backpack, slung it over his shoulder and ran to the exit which he and Wayne had built over the past few days. He also took a sword, just in case things didn't go as planned.

“Come on!” Max yelled as the floor started to crack, “Come on or we will never make it in time!!”

Their plan was simple: Reach the main plaza before night falls and try to set a communication network with The Newly Rescued Survivors, NRS. From there, they’d decide what to do next.

Wayne was trying to prevent the door from opening. Behind the door, there were a dozen or more Creatures trying to get into the room. The Creatures had no definite shape, yet their motive was clear; destroy anything in their path.

Wayne gave up holding the door. As he ran towards the exit, the door swung open and broke into two. The Creatures started pouring in and destroyed most of the camp that Max and Wayne had set up. Wayne was about to reach the exit when the floor beneath him gave way.

In the blink of an eye Max dived and caught Wayne’s hand just as he was falling into the hole. He pulled Wayne up and they ran towards the exit. The heat of the sun burnt their face and stung their eyes. The building they ran out from suddenly collapsed into dust and killed the Creatures with it.

Max waved his hand in front of his face. “How did they know we were in there?”

“Well, since we are past that, I say let’s find the main plaza”

“Hey, Can I ask you something”

“What exactly are those Creatures?” Wayne asked, walking in the direction of the plaza they were headed to.

“Don’t know much about them but as far I’ve heard, they were once made to help in construction fields but were misused by the government as a weapon in the army.”

“Were they out of their minds?” Wayne asked, shocked by the news.

“I guess so.” Max replied, “Anyway, there was some error in programming and when they completed reprogramming the Creatures they started destroying everything in its path. A full squad of officials and army men were sent to the reprogramming center but only found rubble.”

“Oh” Wayne said, because he couldn’t think of anything else to say to a story like that.

So they continued to walk in the harsh summer sun, the plaza was about 3 miles away and even though it was empty between them and the plaza, Max and Wayne both did not lower their guard, even for a moment.

“Do you think the rest of the group made it to our meeting point in the deserted bunker of NRS?” Max asked as they got inside the plaza.

The plaza was once a beautiful place, Max could easily tell that from the clean designs on the walkways. Wait a minute, Max thought, clean? He instinctively pulled out his sword.

The sword was made from bronze, with carvings engraved on it, which Max or Wayne couldn’t understand. It had a range of four feet and had a leather grip with a pure golden cap below it. The sword had been dipped in a rare chemical which allowed it glow with a faint bronze light in the dark.

Max scanned the hallway, noting details and checking if anything is odd. He could tell from the guarded expression of Wayne that something was not right. “Anything wrong?” he asked.

“Yes. See that path?” Wayne said, pointing towards an intact passage, “I can see a camp over there.”

Max smiled. “It is deserted. We can set up a small area to sleep and protect ourselves from the creatures.”

They walked towards the camp and found out that the camp has been abandoned for a few days. There were logs stacked for creating a fire and weapons enough to supply the group they got separated from. There were dresses lying everywhere and that’s when Max had a feeling something was wrong with the camp.

The dresses were unlike anything max had ever seen. They had a different style, a different purpose. He knew he had seen them somewhere but, as usual, his missing memories infuriated him. He saw Wayne picking up a pair of shoes and frowning at it.

“This shoe looks like as if it’s meant for a different person. There are no laces in this shoe.” Wayne replied, examining the shoe as if it was a dangerous substance.

Max continued to look for other things that the camp had to offer. He found two sleeping bags and a bottle of water. He also found a bag much larger than the one he had. When he went to the fire place he saw that Wayne had found a bottle of water, some torches and extra clothes with some food.

After repacking and setting up a shelter they changed his clothes, drank a sip of water and ate some food. They ate fast, gobbling up their food and as the sun went down they planned their next move.

As Max was talked with Wayne he knew that they could manage to be on the run for six more days before they exhaust their supplies. But, he thought, no matter where they are or what they do, evil lurked everywhere around them.