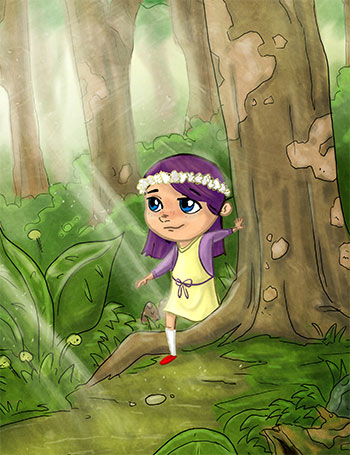 “The Figure” is one of the outstanding stories of the first biannual International Short Story Contest 2017 written by Hannah Smit, South Africa.

Recently I received a letter that contained neither an address nor a hint as to who had sent it. It told of a forest, a great woodland realm not far from my house. I was filled with mixed emotions. Should I go there and meet a mysterious stranger in a remote woodland, or should I stay at home and pretend that I had never read this letter. I took the risk and went to the forest.

Once I arrived, I sensed the presence of the dead almost instantly. Some say that this feeling is caused by infra-sound, tricking the brain into feeling nervous or agitated, but I was convinced that this was more than just sound waves. The forest had a melancholy atmosphere which covered the entire area in a blanket of gloom, adding to my suspicion that this area may be occupied by the dead. Fir trees stood side by side in large clusters, their branches housing small creatures from owls to mice. Beneath the trees, the ground was covered in long, unkempt grass which was only partially visible due to the thick blanket of fog covering it. I even caught sight of a few deer. As you have probably realized, this forest was a place of great beauty, but this beauty was entangled in a veil of terror. Anyway, I had not come to the forest to admire the landscape; I had come to meet the mysterious stranger who had sent me the letter. He, she or it was certainly taking a long time.

As the afternoon drifted on, the sun began to lower down into horizon until eventually night came. Perhaps I had simply been the victim of a prank, perhaps no one had really intended to meet me. I buttoned up my coat and began to walk home, but then I noticed something.

It was the moon. It stood out brightly, a gleaming ivory sphere in the ebony night sky. I was immediately captivated by its beauty and I stood there staring up at the beautiful object before me. I was entranced by its magical glow, and while I stood there in my daze, a creature had begun to make its way towards me. It placed one of its cold hands on my back; I immediately spun around to stare at the grotesque figure. With its maggot infested eye sockets and thin, skeletal limbs, it looked like a decaying corpse. Both fascinated and terrified, I took a step towards it to examine the unsightly creature. As I stood there in amazement, it removed its tattered grey cloak and draped it over me. I started to feel nauseous; the stench from the cloak was putrid with rot and decay. I leaned over and spewed vomit all over the grass, it was deep red. I had vomited up blood. It wouldn't stop, and I felt incredibly weak. A low growl escaped the mouth of the figure.

“Do you surrender?” It asked.

Desperate and confused, I asked,

“Why must I surrender?”

The figure let out on how it had suffered for centuries, and of its desire to take over the body of a living person. I was left with little choice.

“Alright”, I rasped, still weak from the loss of blood.

A few moments later, the figure's soul escaped from its ugly corpse and possessed my body; I was left to inhabit the corpse. Once we had swapped bodies, my body walked away with the soul of a stranger and I was left alone in the forest. I could not possibly leave; I would scare away anyone who saw me. I had to spend the rest of my life in this woodland as a grotesque corpse.