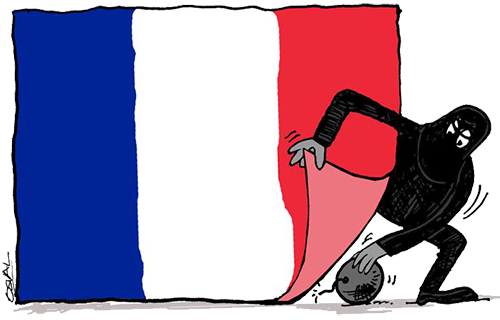 “The End of Terrorists” is one of the outstanding stories of the first biannual International Short Story Contest 2017 written by Roland Engelhardt, Romania.

The End of Terrorists

It is the year of 2030. The Terrorist attacks spread all over France. The last attack was just six months back on the 20th of January. Lots of people fled France, trying to save their lives and their families’. The president of France was exhausted from all the pressure and he asked all the men to join the army and along with all the policemen help their country and their people. The people continued to leave France.

One summer night a group of 10 terrorists attacked a club in Lyon. One of them was caught and questioned by the special Force and all he told them was, “All the French people who have left France will never come back because this land will be no more” and he cried like a mad man.

Outside, the only noises to be heard were gun shots and people screaming and shouting at the top of their lungs. There was another attack, the policemen and the soldiers began to shoot at the terrorists. In the midst of the firing a terrorist shot a boy in front of a policeman. The policeman shot back at the terrorist and grabbed the boy to safety. The boy was about 12 or 13 years old and he was shot in his left arm. He began to cry because he couldn’t bear the pain. One of the policemen transported him to the hospital where he was taken in and cared for by the nurses and doctors. He had to be operated. The boy’s parents were informed about the incident.

At the hospital, the surgeon walked out of the operating room and said “He’s fine”. The boy’s parents cried and thanked the policeman for saving their boy’s life. Everything was under control now, only the small boy had been injured in the shooting.

A week later the terrorists attacked again. This attack wasn’t a usual one. They didn’t shoot. In fact, they were in search of something. They were searching for the boy who was shot. When the parents’ boy heard about this they panicked, but the boy didn’t seem scared, he was actually very angry and he said, “I will kill them”. He used these words in front of his parents, the President and the policeman who had saved his life. The policeman asked the boy what was his name. The boy answered: “My name is Jean”. The policeman asked Jean to bring him a glass of water. When Jean left the room, the policeman asked Jean’s parents to take Jean to their house and to protect him until everything had settled down. The parents replied: “We will do everything to keep him safe”. When Jean came back they told him their decision, Jean said “I accept that, but you have to let me help you in this war against terrorists”. His parents were angry when they heard his reply; Jean had nearly died during the last attack. The policeman said “Alright, but you have to stay with me and you have to be disguised so that they don’t recognize you”. The boy’s parents were very outraged.

His father said “I will join you too; I want to fight for my son”.

The next day they were accompanied to the Center for Intensive Police Training. A surprise awaited Jean at the Police Center; his brother who had been studying in London greeted him there. Jean was surprised. They began the training and Jean learned how to use and how to reload a handgun.

The terrorists were still hunting for Jean, they were looking for him everywhere, but they had a surprise. Jean, his brother and their father were at the Police Station. The terrorists heard of this and attacked the Police Station, ten men tried to catch Jean but his brother, father and the policemen overpowered the terrorists. Jean told his brother “I feel like I am playing Counter Strike, but more intensely”. Jean was very happy because nothing bad had happened to him or his family this time.

After this attack, the terrorists didn’t come back for a while. Jean began to suspect that the terrorists were planning a much bigger attack to capture him. And, unfortunately, he was right.

The next plan had a very large number on the terrorists’ side. They attacked all the people in their way. They killed lots of people and policemen until the army came. It was a massacre. Jean was in a safe place, but he could hear people shouting. He knew it was bad. That was why he went out with his gun and began to shout, “I’m here, Here! Come and kill me if you can”. All policemen and soldiers were stunned; one of the terrorists went closer to him,

“You are Jean, the boy who was shot in the left arm by one of our men?”

He answered, “Yes, I am. Why are you asking me this now? You want to know why I didn’t die?”

“No sir”, said the leader of the terrorists “I want to know why you didn’t run away. You had just stood there and threw stones at us”

“I stayed because I got tired of seeing people die because of all the bad things you do! I’m just a child who wants peace in this world, without being afraid of you!”

Jean winked and shot the terrorists and he ran to look for his father and brother. After an hour, he found them but they were already dead. Jean started crying and went home where he found his mother and the policeman who had saved his life, they too were dead.

After years of peace, Jean became the president of France thanks to his courage and bravery.